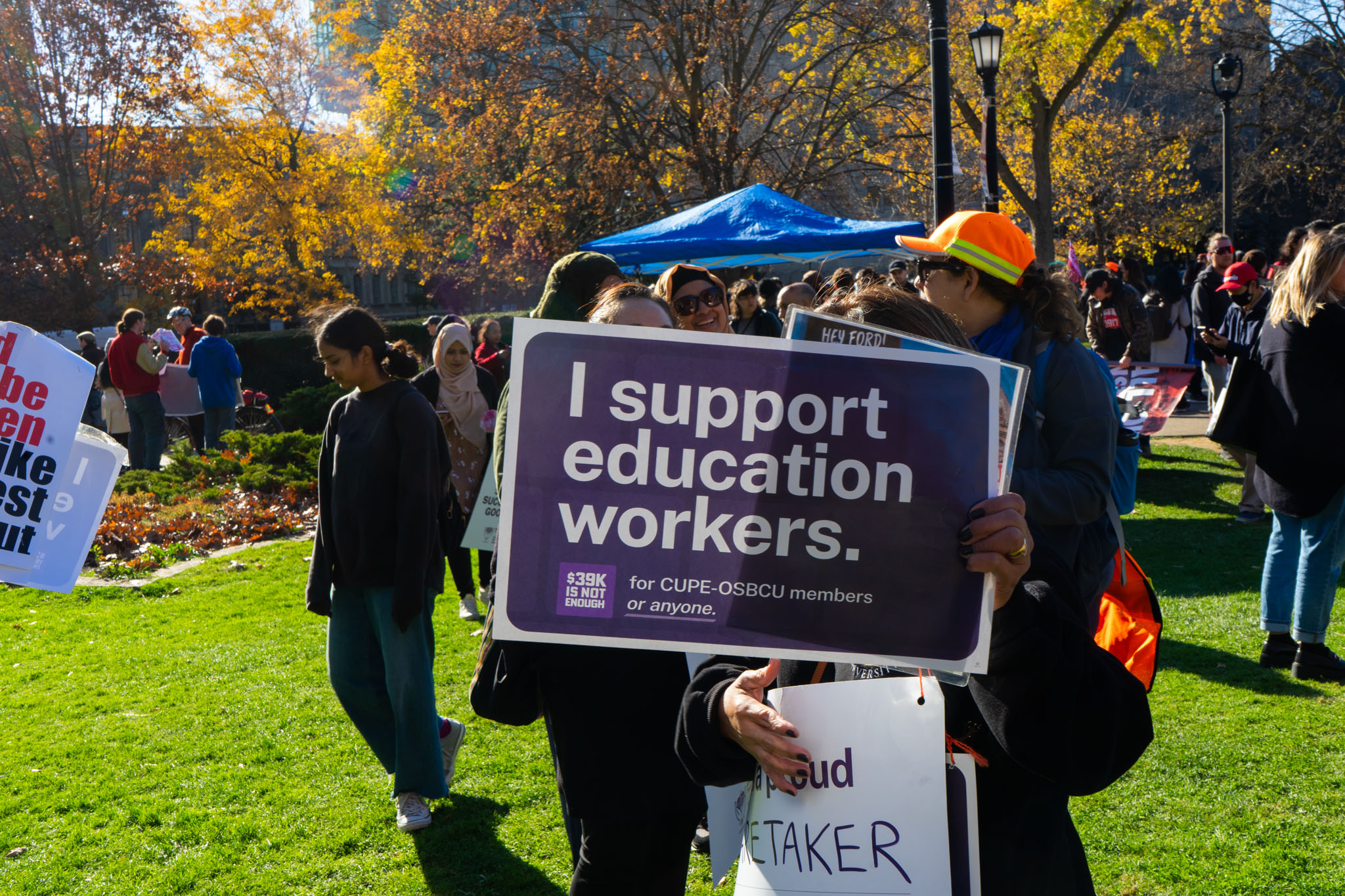 Doug Ford took another look down the path he was leading his Tories and blinked. Bill 28, better named: Putting the Public Sector In Its Place Act was turning out to be a disaster. Maybe it was the likelihood that the Ontario Federation of Labour was about to call for a general strike in support of the CUPE education workers or that all the teacher federations’ leadership had listened to their rank and file and were about to call upon their members for a sympathetic strike vote. Maybe he watched the money flowing in to help these, the lowest paid workers in education, including $1 million from the BC Teachers Federation. Even a hastily set up Go Fund Me campaign had pulled in over $150 000 in two days. 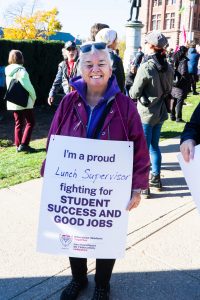 He certainly must have taken a look at the most recent Abacus polling data indicating that not too many people were buying his story. Sixty-two percent of Ontarians polled blamed the Tories, not the education workers, for bringing about their political protest these past couple of school days. Seventy-one percent of them called for the Ford government to negotiate a fair deal with them. Seventy-eight percent of them thought that $39 000 per year for the lowest paid workers wasn’t enough. Clearly there are more beating hearts out there than within Doug Ford’s caucus.

This morning, Mr. Ford stood in front of the cameras and did his best to save face in the harsh light of reality: “Our government is willing to rescind the legislation (Bill 28). Our government is willing to rescind (sic) Section 33, BUT only if CUPE agrees to show a similar gesture of good faith by stopping their strike.” Of course, he didn’t say his government would do anything. His government’s intentions became a bit clearer only later during the CUPE press conference when president of OSBCU (Ontario School Boards Council of Unions) Laura Walton said that CUPE union leaders had received confirmation that the Ford government will set out legislation to repeal Bill 28 “in its entirety.”

Until that legislation is tabled, we have to wait and see. This is not a government you take at face value. Depending on the wording of the bill to come, CUPE workers get their bargaining rights back and can return to the bargaining table with the right to strike in their pockets should negotiations not work out. They don’t have to reset the clock to the beginning of the bargaining process. According to Ms. Walton they can still go out on strike with the usual 5-day notice of their intent.

The fight is not over by any means, as Laura Walton said “education workers have been overlooked, under-appreciated and legislated into poverty.” But CUPE educators will close down their protest sites across the province and return to work tomorrow.

No doubt, Ford advisors took in the number public and private sector union leaders massed behind 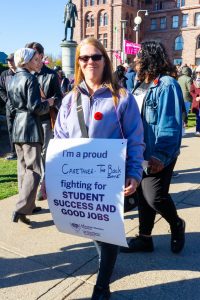 her: CLC, ATU, UNIFOR, ETFO, OSSTF, AEFO, OECTA and OPSEU among them. National president of CUPE, Mark Hancock said “CUPE’s frontline education workers, 70 % of whom are women, stood firm. They took on the Ford government. And the government blinked.” Lana Payne, head of private sector UNIFOR’s 315 000 workers, said that if not stopped, the Ford government would use the same tactics – breaking a strike and using the notwithstanding clause to keep it safe from the courts – again in Ontario and across the country. She added that her executive voted to take whatever action is necessary to get Bill 28 rescinded. JP Hornick, head of OPSEU/SEFPO, underlined the historical significance the largest public and private sector unions coming together to tell a government they won’t tolerate legislated strikebreaking, while adding the caution “we are not standing down, we are standing by” to make sure Doug Ford’s willingness results in something tangible.

The Tories set off a bomb. But they were really just following the neoliberal agenda they brought with them to Queen’s Park in 2018: privatizing or diminishing everything that supports the public good – not building it up or making it last. Good neoliberals don’t want to pay proper wages, or ensure that governments meet basic needs like healthcare, food security, housing and education. It was only natural, that they would go after the most vulnerable workers, offer them a pittance for a raise and leave the bargaining table when education workers said they would be going on strike.

The problem is that this government has the public relations finesse of an ox picking up a teacup. It made idiotic moves like giving away hundreds of millions of dollars for private tutoring or giving its MPPs pay bumps prior to bargaining with low paid workers. It expected teachers to do unpaid work, left over 50 000 kids with autism on a treatment waiting list and blamed the very people who hold our schools together for bludgeoning them with anti-strike legislation. It gave  opponents – all of us – a gift.

It also helped bring together public and private sector unions – even one that supported the Tories during the past election. This common front really must stay together over the coming years to force the Ford government to reverse the damage it has done across sectors like social services, health, housing and of course, education. This has to be at the centre of union activity and it needs to be consistent and well-organized. Anything short of that and we’ll be facing the same situation we did last spring when there were a lot of people of good will just hoping for the best.

As for that loathsome tactic of using the notwithstanding clause like a bulldozer: “Not today, not tomorrow, not ever.” 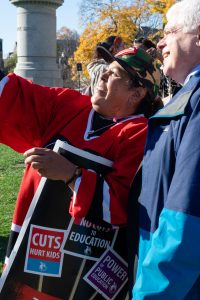