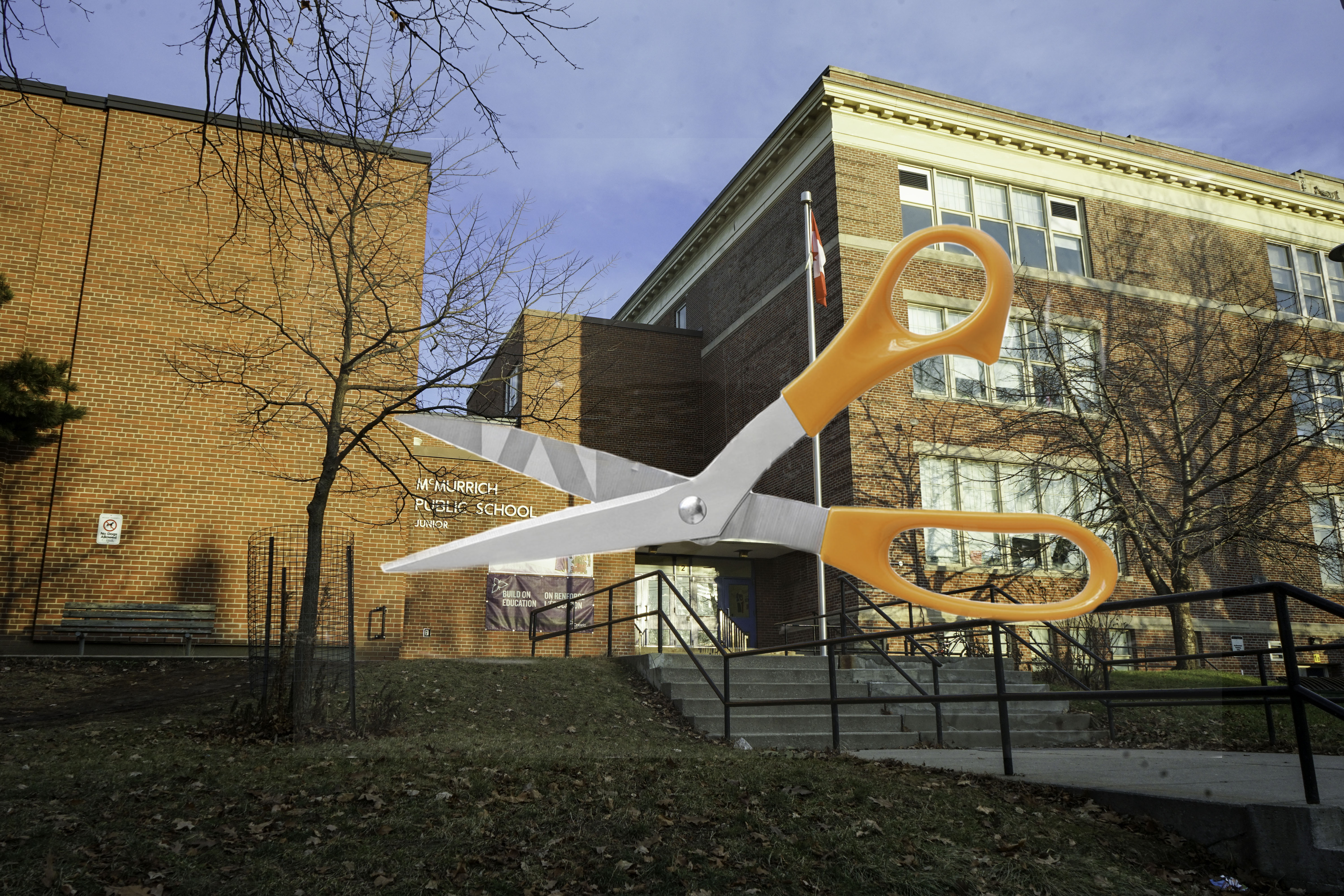 It is a miserable Season’s Greetings card to Ontarians; a lump of coal called the Education Funding Guide 2019-20. It’s setting us up for cuts to education in the order of 4 cents on the dollar – or about $1 billion out of a $24 billion education budget. Education Minister Lisa Thompson, prefaces this 5-page disaster with the unbelievable comment that “educating our children is the most important job in the world.” In the next breath she outlines a possible 4 percent cut and then asks us how we’d like to do it.

If it’s possible to be clearer about her lack of regard for educating our children, just as I was writing this article Ms. Thompson cut $25 million from the Education Programs- Other (EP-O). This program provides a host of services not usually covered by education grants like community outreach, after-school programs for students on the autism spectrum and leadership for youth. According to the Toronto Star, grants were cancelled outright for tutors in the classroom, support for daily physical activity, a program to promote leaders in racialized communities, as well as another to promote equitable access to post-secondary education.   As usual, the cut came without warning, with an emailed announcement this past Friday night. School Boards don’t yet know how much of the money they were promised for these programs back in March will actually arrive, if any.

This is just another opportunity provided by the Ford government’s so-called ballooning deficit. There are many others:  cancelling the Basic Income Pilot Project, funds for upgrading school buildings, shutting down the Truth and Reconciliation curriculum writing program, getting rid of Ontario’s child advocate – the list goes on.

So, it’s no surprise that cuts are front and centre in the Education Funding Guide. But it also raises some alarming questions under three of its headings:

Efficient Price Setting. One example of efficient price setting is basing payments on the average cost of heating, lighting and maintaining schools per square foot for each student. School boards have fought for years with the province over funding schools based on their actual needs rather than the provincial averages.

For example, boards with old schools have needs that don’t fit a funding formula based on average class sizes needed to maintain newer schools. Averages don’t work for all situations. But the Guide asks the question: Can we go further down this road? Can we make factors like efficient use of space apply to more situations? It leaves the question open as to how this government will define “efficiency.” It looks like a new way of shortchanging school boards.

As Craig Snider, Associate Director Business Operations and Service Excellence at the Toronto District School Board said in a submission to trustees: “Efficient pricing is an economic model that suggests that perfect information is known to set a price. The concern with the example provided (in the Guide), ‘class size’ is that it only addresses averages and space usage not student achievement outcomes. The TDSB would ask: What information was used to set current benchmarks and was student well-being data used in the calculation?”

Outcomes-Based Funding: This funding approach is supposed to “aid students by encouraging schools to focus more on providing supports and clearing the obstacles that prevent some students from achieving their full potential and learning.” An example of this is the Learning Opportunities Grant (LOG) that was introduced in 1998 to funnel more money to school boards where students with lower family incomes needed more support to succeed in school. The LOG was supposed to support early intervention, guidance, individual help for kids as well as parent support. According to the advocacy group People for Education, over the years the LOG has focused less and less on providing those kinds of supports and more on general literacy and mathematics.

Since the Guide doesn’t offer any idea of what other “outcomes” might be funded, are we looking at education funds earmarked for government preferences like Science Technology Engineering and Math (STEM)? That certainly was a big interest of the recent “biggest consultation ever” run by the Ministry.

And what about this clearing of “obstacles?” Former TDSB trustee and now MPP Chris Glover argues that between 1998 and 2015 the board faced a “funding shortfall every year and had make cuts each year to programs and services which have never been restored.” He’s describing kindergartens packed with 28 children having to share their education assistants with special needs kids who need to be supervised just to be in school. If the Ford government really wants to clear obstacles, why not just restore the Learning Opportunities Grants to their original purpose?

Accountability and Value-for-Money: Watch this one. The Guide blandly asks if the Ministry of Education should “review targeted areas of the funding formula to increase accountability and value for money.” We certainly don’t want school boards wasting money by purchasing things like specially kitted-out camper vans – that appears to be Mr. Ford’s prerogative. But at a time when schools can barely keep the lights on, what does value for money really mean?

We get a good clue in the Ernst Young report: Managing Transformation: A Modernization Action Plan for Ontario. Ernst Young was commissioned by the government to find the “efficiencies” Mr. Ford promised during the election. It’s here that you can read about funding for “outcomes” as a way of increasing competition between government departments. It recommends that the government “Consider use of alternative approaches to funding including direct funding to individuals and payment for outcomes.” (emphasis added)

Do you hear that door creaking open?  It’s opening up into a room called “Vouchers and Charter Schools.” The idea here is that, if you give people the option to put their tax money where they want, they might opt for sending their kids to a private school or partly government-funded charter school. Presto! This will automatically introduce the discipline of the free market, increase efficiency and save money.

That may be true in Ernst Young’s alternate universe. Here in Ontario, it will further degrade our underfunded and beleaguered public education system. Is that what the Ford government is thinking when it speaks of “value for money?” Chris Glover thinks it’s the “first step to setting up privatization of public schools.”

Let’s remember where Minister started out – that 4 percent cut. No one I spoke to sees this Education Funding Guide as anything other than an announcement of funding cuts. NDP education critic, Marit Stiles likened it to “cutting the entire transportation budget out of the Ottawa Carleton District School or slashing half of the Toronto District School Board’s Budget for Special Education.” Harvey Bischof, president of the Ontario Secondary School Teachers Federation (OSSTF) said the $1 billion dollar cut would have a “devastating effect on program and delivery of services to schools” in a system which is already underfunded. He is also concerned about the safety of teachers and other education workers in schools, reckoning that, in the end, there will be less money to pay support workers to supervise children who, through no fault of their own, may be prone to lashing out when they’re confused of frustrated in a school that doesn’t have the resources to help them.

Head of the Elementary Teachers Federation of Ontario (ETFO) Sam Hammond says these cuts “show absolute disregard for what teachers do.” He too worries about the prospect of a voucher system and charter schools, seeing the option of choice as a red flag announcing serious trouble for public education in Ontario. In a press release he says that “investment, not cuts” is the way forward for public education. He adds that Minister Thompson has so far been mute on the topic of whether or not cuts to education would be the full 4 percent.

If there is a 4 percent cut to funding, school boards have no wiggle room to deal with it. At the TDSB for example, most of its grants are spent as soon as it gets them; there is a small percentage left over for any discretionary expenses and the board is already stuck with nearly $100 million in accumulated deficit (2017 figures). On top of that is a $4 billion backlog in school repairs. A 4 percent cut means, quite simply, the board will have to cut programs

So, what dreadful calamity happened between last spring when a Liberal government came forward with a pre-election budget of spending and now with Doug Ford scraping for pennies?

Nothing. This is all about the appearance of a crisis – namely the $14.5 billion deficit, the Tories say forces them to make cuts everywhere. Inventing a crisis was the philosophy of the last Conservative government under Mike Harris, which went on to solve it by stripping basic services, schools and union contracts until there was indeed a crisis of public spending across the province. The effects are still seen in our crumbling schools.

It’s now the operating principle for Doug Ford’s Tories. The difference is that they work faster and more viciously.

So, what about this crisis? Before the Liberal government of Kathleen Wynne was defeated, it posted a $6.7 billion deficit in its spring budget. Auditor general Bonnie Lysyk argued that a $10.7 billion pension surplus on the province’s books shouldn’t be counted as an asset. That meant the deficit should be $11.7 billion.

Then the Tories just decided it was $14.5 billion. They neglected to ask the province’s chief controller Cindy Veinot what she thought, because she disagreed with them and Ms. Lysyk. She had signed off on the Liberals’ original deficit prediction. Ms. Veinot couldn’t sign off on the Tories’ fiction, so she resigned as provincial controller.

If the hand-wringing over the size of the deficit seems sketchy- that’s because it is. After all, it was Mr. Ford who decided to cancel the cap and trade environmental alliance with California and Quebec. This could have given him billions to wrestle that deficit – however much it is- to the ground. It had already put over $2 billion in Ontario’s coffers. Instead, he’s pledged $400 million over the next four years to encourage the private sector to reduce emissions. He could also hold off on the $275 million tax break for the province’s wealthiest people, but that didn’t happen in November’s mini-budget from Finance Minister Vic Fedeli.

Truth to told, the Tories aren’t fighting hard at all to get that deficit under control. This latest invented “crisis” is about ideology: Ontario being “open for business.” It’s about cutting government services so they can be offered for a price. As Doug Ford undercuts basic social services and education, he pays allegiance to the competitive rigour of the marketplace, or as Ernst Young puts it: “…providing funding to individuals, who can then choose their service providers through a form of market activity and discipline.”

Mr. Ford could provide sufficient and stable funding. But that’s not going to happen. Instead I think, he plans to cut public education to the point that it is unworkable. He’ll leave it to those who can pay the price to have a decent education for their children.