Educators too must work to upend the roots of racial violence

Days after the death of Regis Korchinski-Paquet, who plummeted 24 stories to her death while police were in her High Park apartment, thousands of people gathered at Christie Pits to protest anti-Black racism. The demonstration, organized by Not Another Black Life,   followed the killing of Minneapolis man George Floyd, a black man who died after being pinned to the ground by former police officer, Derek Chauvin. Chauvin kneeled on his neck for over 9 minutes as Mr. Floyd repeatedly cried out that he couldn’t breathe. He has since been charged with third degree murder.

Huge demonstrations and violence have engulfed cities across the U.S. as President Donald Trump babbles nonsense and inflames this dreadful  situation. Educators have a crucial role to play in countering this vicious hatred. Here is a statement by the Chicago Teachers Union (CTU), a truly activist federation of teachers and education workers.

The Chicago Teachers Union is an organization that values and respects the needs of our students and their communities. Our work as educators and unionists is driven by the conditions that our students and their families experience. Racist policing is a part of those conditions, contributing to the student trauma that we must address. Because that trauma needs treatment.

We work in a city where 90 percent of our students are of color, and we understand that what they and their families face is the result of decades of racist and immoral policy decisions. Our students do not receive the resources they need because of who they are, and teachers, PSRPs, nurses, clinicians and librarians are charged with working alongside families to ensure their success.

Sadly, we also charged with helping to ensure their survival.

Our students are treated differently because of the color of their skin, so our work is both overwhelming and never-ending because of racism. District and federal policies are designed to ensure the appearance of compliance for students of color, but the reality is that our schools are not funded or resourced enough to actually alleviate conditions that cause trauma and increase student need.

These conditions have fed the grief and anger so many feel today, and set the stage for the hopelessness and rage we see coursing through the streets of Chicago and across the nation. But those who invoke the nonviolent aspect of the legacy of the Rev. Dr. Martin Luther King Jr. have missed a key point: When asked about rioting, Dr. King once said that that those who denounce rioting must be equally fervent in denouncing the conditions that gave rise to rioting. From 1968, at Stanford University:

If we are to achieve the social justice and progress Dr. King spoke of, we must provide the proper resources for our students and their families, and remove symbols of our city’s failure to hear their cries. Now is the time for the mayor’s appointed Chicago Board of Education to cancel its $30 million per year contract with the Chicago Police Department, and use those funds to provide emergency response counseling and support for students in crisis. The Minneapolis Board of Education has already taken this step, which would reduce the tension that exists between our youth and law enforcement, and increase the resources our city will need in the aftermath of the COVID-19 pandemic.

We applaud our sisters and brothers in the Boston Teachers Union, who, for the next year and beyond, are promoting racial equity training for all elected building representatives, staff and the Union’s executive board. As educators, part of our job is to inform with facts and context the trauma that is roiling our nation. Therefore, our own union will be expanding our #WeStillTeach campaign to include #BlackLivesMatter curriculum, and calling on our members to submit lessons that teach about police violence, racism and systemic inequity.

Laquan McDonald. Rekia Boyd. Quintonio LeGrier. Bettie Jones. The pain that some communities feel in our city is real—and has been real, for generations.

Our city can rebuild. These lives are gone forever.

We must move to safety, not occupation.

We must move to investment.

True accountability is when our communities have justice and equity.

We will continue to say #BlackLivesMatter, demand justice and challenge the systemic discrimination that undermines our students’ needs, aspirations and promise.

In safety and solidarity, 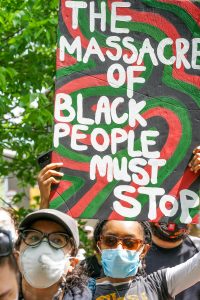 Laquan McDonald, age 17, was shot 16 times and killed by former Chicago police officer, Jason Van Dykeon October 20, 2014. Van Dyke was charged with first degree murder and convicted of the lesser charge of second degree murder in October 2018. He was sentenced to 7 years prison, of which he will serve 3 1/2.

Rekia Boyd, age 22, was shot and killed after former Chicago police officer Dante Servin fired 5 shots at a group of people gathered in a park on March 21, 2012. He was charged with involuntary manslaughter but not convicted after judge Dennis Porter ruled that the charge should have been first degree murder, rather than manslaughter. Servin claimed that one of the people in the group pointed a gun at him. It turned out to be a cellphone.

Quintonio LeGrier, age 19 was shot 6 times and killed by Chicago police officer Robert Rialmo, in December 2015. Rialmo also killed his neighbour Bettie Jones, a 55-year old mother of 5 in the process. Quintonio Legrier was reported to be suffering from mental health problems and wielding a baseball bat. A jury found that Rialmo had acted “reasonably.” Rialmo sued Quntonio LeGrier’s family for his emotion distress allegedly brought by the killings.