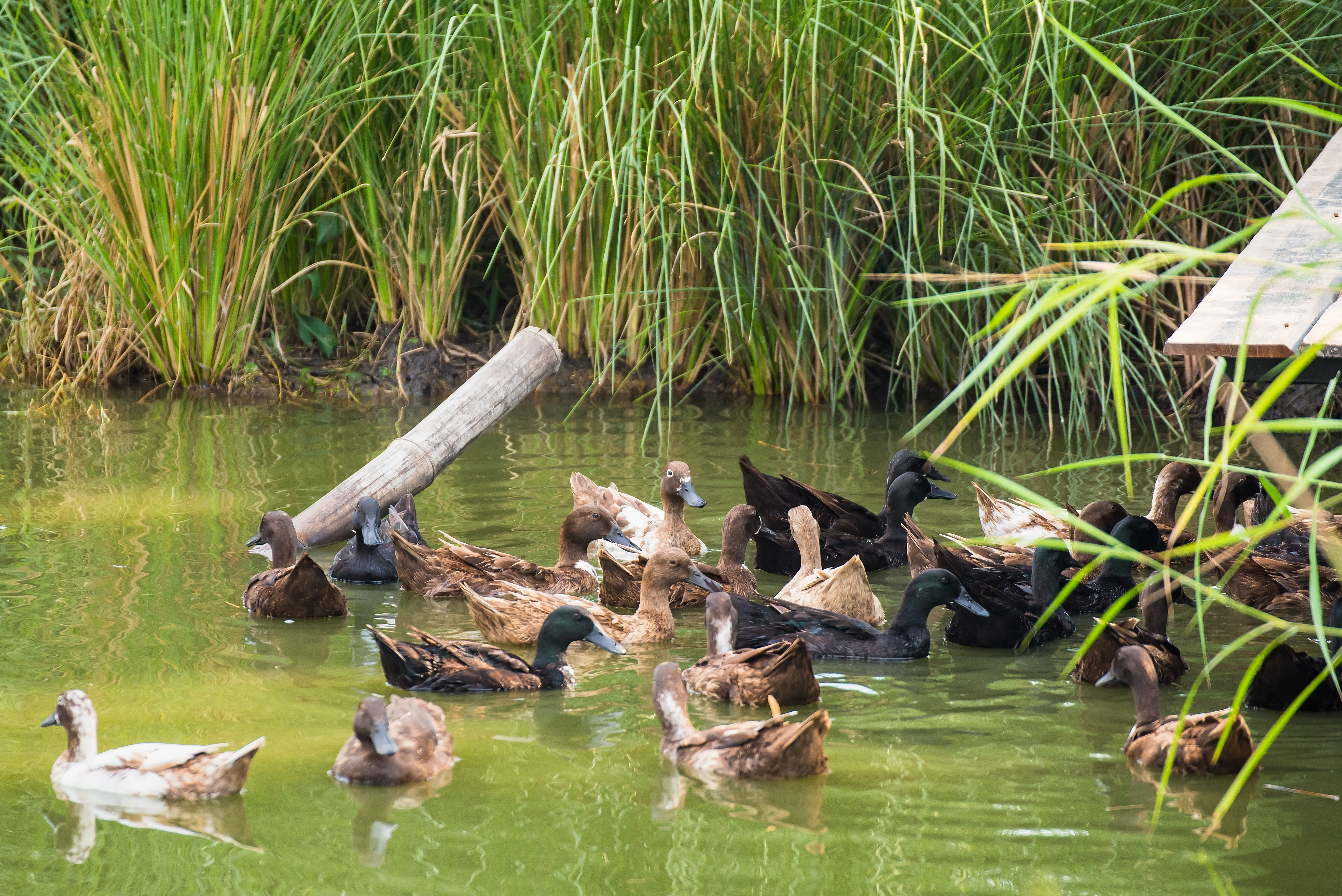 Kids can sit in a classroom and learn about the world from group work, books, presentations, talks and so on. All of this is fine but a teacher who is tuned into the world around her or him sees an opportunity for truly useful learning and seizes it. It’s a chance to engage in something that is happening outside the walls of the school in the world that children will enter one day. It’s also a chance to interact with the world – for young people to practice being responsible citizens – people who ask questions, look for answers and let their thoughts be known to those who ought to hear them.

This is the opposite of so-called e-learning which requires distance, disengagement and passivity; which is about gaining a credit rather than developing understanding or simply growing up.

There are many, many teachers in our schools who have sought over the years, to help their students see the bigger picture of the world and learn a bit about where they might find a place in it, what they might do about forces they’ve never considered.

David DePoe, is one of these teachers. Now retired from a long career with the Toronto Board of Education and then the Toronto District School Board, he looks back at several pivotal teaching and learning experiences.

In 1990, I was teaching a Special Education class in my second year at the First Nations School of Toronto, located east of Dundas and Broadview. In the previous year, I was involved in founding the Teacher’s Environmental Network, and was a member of the City Task Force to Bring Back the Don, which was engaged in cleaning up the river, and greening the valley.

One day that September I took my class on a Nature Walk into Riverdale Park east. As we headed toward the trail, we noticed City Parks workers mowing the grass on the steep hill at the north end with lawnmowers on ropes. I stopped the children, asking them “What do you think about that? ”

One of them exclaimed, “That’s ridiculous!” Another said, “It’s stupid, they should just plant something there. ” I replied, “That’s a really good idea, I think we could do something about that. What do you think should be planted?” In the subsequent discussion, we decided that hill should become a natural forest. I asked them, “Would you like to be involved in that?” Their response was an enthusiastic “Yes!” 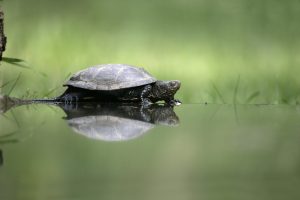 I took the idea back to the Task Force, and they were equally enthusiastic. The chair approached the nascent Evergreen Foundation, whose mandate is to bring nature to cities through naturalization projects, and they agreed to supply native wildflowers, shrubs and trees. We got the approval of the City Parks Department. The students cheered when I told them. Almost the whole school, including parents, became involved. Over several days, we dug and planted that hill, starting at the top. It was hard but very satisfying work. When we were done, it sure looked different from grass! We were really proud.

At an assembly, I told them, “You can take your own children there, and tell them how proud you are that you helped create a forest, and tell the story of how we created a forest that will help clean the air and water, provide a home for birds, insects, and animals, and honour Mother Earth.”

And so it came to be. You can empower children and set them on a path to make change. If you go there in 2019, you can see a mature forest with tall trees. I hope many of the students have revisited the site with their children.

Three years later, when I moved to Dundas Junior Public School in the other part of the same building as First Nations, I was a Special Education Resource teacher working to support children in Grade 4/5 classes.  I learned that the Task Force wanted the City to create a marsh on the west side of the Don River south of the Brickworks to deal with the runoff from Rosedale that was polluting the water. This is right where Bayview Avenue veers around to hook up to the Don Valley Parkway.

Of course, I volunteered my classes. So, on a Friday in June, we travelled there to plant water plants at the now excavated site. When we took the children a year later to observe the site, were astonished to see a fully functioning marsh! There were tall grasses, thriving water plants, and even a couple of ducks!

Again, the students were extremely proud of helping to make the river clean.

Fortuitously, on the same trip, we were treated to a wonderful geology lesson. As we continued up to the Brickworks, and as we sat down to eat our lunches, we saw a group of people clambering up the west wall stripping off the vegetation. My 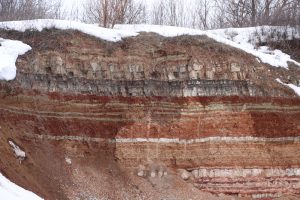 curiosity piqued, I led the children over to the steep wall.  It turned out that they were geology students from U of T Scarborough, led by their professor, Nick Eyles, engaged in exposing the thousands of years of sediment so a group of geologists attending an international conference could be shown a unique site. The professor explained it was the only place where you could see these layers. He asked if the kids would like to help. Of course they would. They used the small shovels that all geology students get, to scrape off some grass. They were thrilled when he told they could take home any small fossils they’d found!

He also told us we should look at the rocks on the south slope of the site, because they were millions of years old. Talk about hands on Science! Talk about engaging children in learning!

You never know what can happen until you get out there.

The next day, my partner Sue and I rode there on our bikes, and Nick Eyles was there delineating the layers with biodegradable orange spray paint, and symbols, preparing for his presentation to colleagues. He happened to have copies of his new illustrated book of Toronto geology, in his van, and gave me a nicely inscribed one “To a fellow teacher.”

In 1995, I moved to Wilkinson Public School. When the Mike Harris government got elected, I knew we were in trouble.  I was on the Vice Principal eligibility list, but withdrew my name, because I couldn’t see myself implementing his cuts to education.

My daily routine was to do current events first thing in the morning with my Grade 4/5 class. I would hand a clipping from the Toronto Star to each group so they could discuss it and report back. I always chose topics of interest to them, everything from sports, human interest, injustice and bias, to science, and the environment. I had even done a Media Studies bias activity on the Star to begin, having them cut all the pictures from ads and news articles in the paper and tape them onto chart paper divided into white men, white women, men of colour and women of colour. Of course, they discovered that most of them were white males in suits and ties, some were white women, who some of the kids noted looked thin and rich, a few were black men, mostly athletes or accused criminals, and very few women of colour. The result, divided into quadrant and tacked on a bulletin board, spoke volumes. Come to think of it, I’d like teachers to try it now as a lead in to media studies.

I had a politically aware group of kids in my class who were quite knowledgeable about and didn’t like the cuts agenda of the Harris government. Reading the news every day with me choosing the articles may have led to that! One morning I gave them an article about the government’s plan to open up Provincial Parks to forestry and mining. When the group reported back, I asked as usual what the class thought. There were quite a few upset and angry children.

So I said to them “There’s something you can do to tell them how you feel about this plan. You can write letters to the Minister who’s in charge of this. You could make a difference” The Minister was the egregious “create a useful crisis in 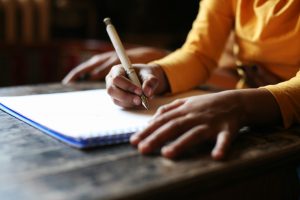 education”, John Snobelen, who had moved from Education to Natural Resources.  They responded enthusiastically to this idea.

We spent almost the whole morning working on the letters.  I circulated and helped them edit their drafts to support them in expressing their ideas as well as they could.  The letters were impressively articulate, talking passionately about saving ecosystems, animal habitats, the dangers of water pollution, and that there were lots of better places for mining and cutting down trees. After school that day, I got on my bike and stopped at Queen’s Park on my way home to drop a large envelope full of their letters at Snobelen’s office. The return address was Room 21, Wilkinson Public School, 53 Donlands Avenue.

It took a full two months to get a reply from Snobelen, or more likely one of his minions, right near the end of June.

“Dear Boys and Girls,
I too care about the birds, the trees and the animals.”

As soon as I read that line, one of the girls shouted, “He does not! He’s a liar!  If he cares about that, why is he going to wreck the parks!” As I continued to read, there were a lot of sarcastic “sures” expressed. None of my students accepted that he was telling the truth.

I felt it was a good lesson about politics and politicians, but also about how kids had the power to express their ideas and disagreements with them. I told them that, some day, they would have a chance to vote this government out, but in the meantime, they could go to demonstrations and still write letters; that government officials knew each letter probably expressed the views of 20 other people.  Little did I know that we’d be having a province wide political strike two years later, and at least at Wilkinson, have support from our parents and students.

So curriculum is much more than an overwhelming list of objectives. We teach children, not objectives, and our goal as teachers should be to make learning come alive and engage them, so they become involved and love learning.  Our ultimate outcome in a democracy is to turn out aware, involved citizens who care about social and environmental justice.