In April, celebrate the history of Latin-America not Hispanic heritage

We need to reconsider the use of the term “Hispanic Heritage” as something to celebrate in April.

Let’s begin with a fact. Christopher Columbus, an Italian sailing for Spain, along with other conquistadores like Cortés, Pizarro and de Soto, set off a genocide against Indigenous peoples. Funded by European monarchies, they and others who followed, used enslaved Afrikan and Indigenous people to build colonial empires in the Americas/Turtle Island/Abya Yala/Pachamama. Funded by European monarchies, this genocide devastated populations as it erased history and culture.

This article is about how that applies to the genocidal monarchies of Spain and Portugal.

Why drop the term “Hispanic”? A quick google search turns up the following definition:

Adjective: Relating to Spain or Spanish-speaking countries like those of Latin-America

In both definitions you see “Spain” or “Spanish-speaking”, thus explicitly tying our collective identity marker to one of our colonizers, from whom all countries in Latin-America have declared national independence.

Celebrating “Hispanic Heritage” invites colonial and white supremacist narratives in telling our stories. In April 2014, at a joint Toronto District School Board (TDSB) and Toronto Catholic District School Board (TCDSB) Hispanic Heritage Month event, a presentation was given to hundreds of students from various schools praising Spain/Iberia for its contribution to civilization. Unfortunately the grade 7 class that put it together missed Columbus’ contribution to the genocide of the Taino people of the present-day Caribbean. The civilizations of Indigenous people throughout what we call Latin America were treated with interest, but their fates were mysticized as an “enigma”  – an unsolved mystery- in this presentation.

This is not to cast aspersions at students for trying to learn what they can about history, but to make sure educators guide them properly.

As recently as 2022, a school board shared a Hispanic Heritage Month Resource Guide for teachers, with one resource from the American Library of Congress glorifying Christopher Columbus and conquistadors, – completely erasing the genocide they committed by calling it European exploration. 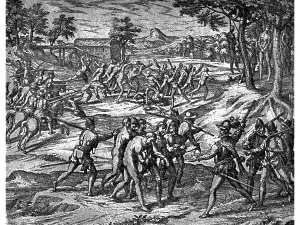 Hispanic Heritage Month includes and centres on Spain in celebrations of heritage/histories of the lands in Latin America, Central America, and the Caribbean.  By doing this, it erases histories pre-1492 (start of American colonization) and centres on one of our white colonizers, Spain, from whom we have national independence. As long as Hispanic Heritage Month exists, colonial Spanish-centred resources will be shared and applauded.

This is not about erasing history. Spain plays an influential part in many of our heritages and histories but for many of us, its influence was forced upon our ancestors through vicious colonization which wiped out entire Indigenous populations. Each of us with Spanish heritage needs to reconcile with this fact but it does not mean we should celebrate, nor centre it.

Pushing back at Hispanic Heritage month

In both these cases, there was little to no community consultation on the matter. The City of Toronto relied on letters from individuals in the Centre for Spanish Speaking People, Canadian Hispanic Congress, Hispanic Fiesta & Las Flores Non-Profit Housing Corporation Cultural Celebration of the Spanish Language, Association of Ecuadorians in Ontario, and the Hispanic Political Affairs Committee of Canada.  It is important to note that all of these organizations/individuals have a vested interest in maintaining a focus on the Spanish language and Spain in our community due to the very nature of their organizational names.

It is also important to note that both ex-Councillor Cesar Palacio and ex-Liberal MPP Cristina Martins were well aware of community concerns around the legislation of the identity marker “Hispanic”.  Community leaders held numerous meetings and wrote plentiful emails to raise awareness of the issue to them directly and were brushed off as a “small minority” within our community. In fact, Councillor Palacio’s and MPP Martins’ actions prompted the formation of apetition and the Latin American History Collective, a coalition of community leaders and organizations, to demand a change of the month to “Latin-America History Month”. This was followed by a rally in Queen’s Park on October 12, 2015 and on-going discussions with the TDSB and Federal government.

Andrea teaches us that there are Spaniards who oppose the term Hispanic as an identity marker as well.  In October 2016, Badalona, a city in Spain, canceled “Día de la hispanidad” as a public holiday because it commemorates the day Christopher Columbus first set foot in the Americas and glorifies the genocide that occurred afterwards.

She is now the Director & Principal Consultant of Across the the Diaspora in order to raise awareness of “Why Latin-America History Month and not Hispanic Heritage Month”. You can see one of her resources here.

In 2016, in the TDSB, ex-Trustee Tiffany Ford successfully led the declaration of April as Latin-America History Month, learning from community leaders like Andrea.  This month created a platform for an active planning committee to centre Afrikan and Indigenous voices from the lands known as Latin-America/Abya Yala/pachamama for students in the TDSB.  However, at the time of writing this article, both the TDSB and TCDSB continue to celebrate Hispanic Heritage Month, in part because Ontario has legislated that the month be Hispanic Heritage – not Latin-America History. The TDSB continues to celebrate “Latin-American History Month” in April.

In 2018, the late Conservative Senator Tobias Enverga Jr., the first Canadian Senator of Filipino descent, moved for the declaration of Latin American Heritage Month in  something that was completed after his passing.  Senator Enverga Jr. empathized with the impact of Spanish colonization, changing his initial Bill S-228 from “Hispanic Heritage Month” after first reading, to “Latin- American Heritage Month” in the second reading. He explicitly stated the desire to be more inclusive by pointing to geographical lands instead of imposing an imperial identity marker on communities from Latin-America.

A message to my fellow Latin American/Latino/Latina/LatinX/Latine people living in Canada/Turtle Island: We all share ancestry from the lands in the south. These lands are known by many names but they are/were home to many of us, our parents, grandparents, great-grandparents, etc.  Focusing on heritages and histories from the lands dominantly known as Latin-America allows for self-identification and includes shared colonial heritages/histories from lands like Brazil and Haiti (which are excluded from “Hispanic Heritage”). 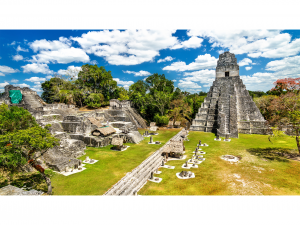 There are also hundreds of Afro-Indigenous, and European, languages spoken in the lands of Latin-America. In addition, our diaspora in Canada/Turtle Island do not all consider Spanish our first language, having spoken English or French for generations. This does not make us any less Latino/Latina/LatinX/Latine. However, it would make us less “Hispanic” because of the focus on language.  Our family histories from the lands in the south unite us, not a single language.

If you are someone with positional power reading this, please use this power to decolonize and stop celebrating Hispanic Heritage. If you agree with the narrative of Latin-America History Month, please organize with others and use your collective power to advocate for name changes. While semantics may seem superficial at first, they frame our thoughts and potential actions. An equitable and inclusive framing is vital to building a better world centred on empathy for each other.

Derik Chica is a secondary school teacher in Toronto.