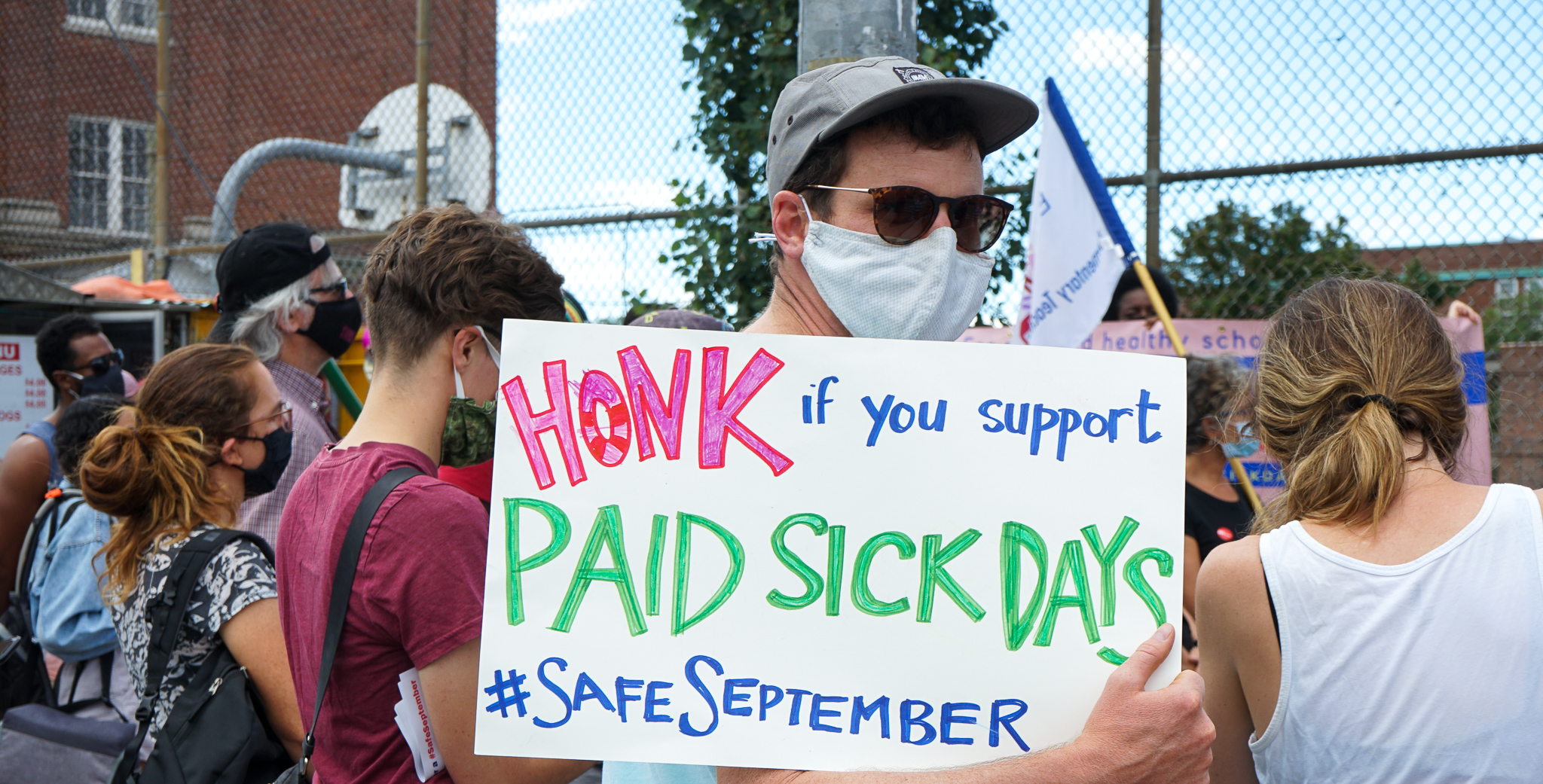 Is there safety without paid sick leave?

With schools across Ontario set to reopen, the question is when the other shoe will drop. That shoe is the certainty children and adults in schools will come in contact with COVID-19 and have to go home. Yesterday, Toronto’s chief medical officer, Dr Eileen de Villa released a plan to deal with a second wave of the virus that is “inevitable”, with school re-opening. Just last Friday, over 80 students were isolated in Quebec City after 3 cases were detected in local high schools.

School boards across Canada have been getting ready for this imponderable mess, setting up protocols and timelines for testing, isolation and quarantine. But, set aside issues of larger class sizes, distance learning, transportation and dozens of other concerns, there is still an inequity dinosaur squatting in the middle of the room. While some families will be able to cope with the fact that they or their kids may have to stay home, for others it will be a disaster.

Support at Bloor and Dufferin

This was clear last Saturday, when dozens of people with different perspectives on schools met at the corner of Bloor and Dufferin Streets to support folks who can’t afford to stay home if they or their children come in contact with COVID-19. 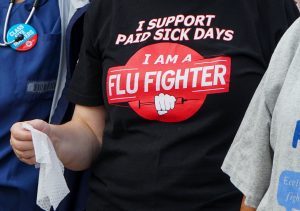 One of those people is registered early childhood educator, Savitri Sinanan, who asked: “How can I afford to get sick?” As an international student, she told me that she gets no paid sick days. She wants to see 7 permanent paid sick days for all workers and 14 days for times like the pandemic we’re currently trying to cope with – supposedly all together. But that means putting something real on that table.

It was good to see the variety of organizations represented. Sarah Peek from Ontario Education Workers United (OEWU) made it plain that schools can’t reopen safely if workers who don’t automatically get paid sick days, have to stay home to look after themselves and their kids. Just as far as education workers are concerned, we’re looking at people like occasional teachers, crossing guards, bus drivers and casual workers like cleaners.

But what of parents of students who must go to work to pay the rent and put food on the table? These are often people living in neighbourhoods where the risk of transmission is highest, places like Rexdale, Jane and Finch and north-east Scarborough. These are people who take on minimum-wage, precarious work without paid sick days because they have no alternative, because they’re isolated by race or they’re  immigrants or they’re stuck on the margins of the economy trying to get a foot in the door.

For Sarah Peek, it’s a matter of “fighting for racial, economic, social justice and collective responsibility that goes hand in hand with a safe re-opening of schools.”

For all he’s said about keeping people safe, Doug Ford  has certainly not been good to workers in Ontario. Soon after his government came into office, it dropped Bill 47 – Making Ontario Open for Business Act onto people with precarious jobs, freezing the minimum wage at $14 per hour. It also cut the paltry 2 paid sick days that the Liberals put in place before they were defeated. After the Tories were done, workers could claim a total of 3 unpaid sick days per calendar year for looking after themselves, 3 more to take care of their families and 2 in the event that a family member died. Previously, workers were granted 10 days personal leave without facing loss of their jobs.

According to Bradley Metlin, spokesperson for the Ministry of Trades, Labour and Skills Development (MTLSD) parents shouldn’t worry about losing their jobs if they have to stay home longer than the prescribed time to look after themselves or their families. He said the Ford government passed the Employment Standards Amendment act (Infectious Disease Emergencies), 2020 to enable them to stay home indefinitely,  as long as COVID-19 is in effect.

But what happens if an employer in a low-wage, no contract, precarious job situation decides that someone’s job no longer exists when he or she is off sick? That unfortunate person could complain to the Ministry. Imagine someone making $14 an hour, isolated due to COVID-19 and/or looking after family stuck at home, tracking down the right person at the Ministry of Labour to make a complaint about an employer with monumentally more resources. It’s not going to happen.

And it’s not the same as paid sick leave.

Mr. Metlin referred me to the federal government’s Safe Restart Program which says that it will provide “10 days of paid sick leave related to COVID-19” for workers who don’t already have it. 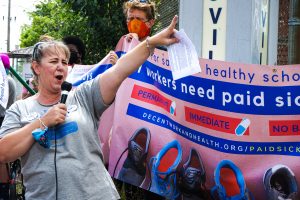 It’s just not that simple according to the Decent Work and Health Network (DWHN) a group of Ontario health workers and community members concerned about the effect of inequities on the health of people in precarious working and living conditions. They say that the federal government’s plan isn’t the same thing as paid sick leave since it doesn’t kick in as soon as someone is sent home with symptoms of COVID-19. Also, workers can’t apply for the benefit until they have “lost 60% of their weekly income due to illness.” So, how do people living from paycheck to paycheck keep going waiting for the benefit to start? These are not people with plenty of savings and investments to fall back on.

For that matter, how is 10 days of support, once you get it, going to make much difference if you or your kids are isolated for two weeks minimum?

DWHN recently put out a report Before It’s Too Late: How to close the paid sick days gap during COVID-19 and beyond which says that 58% of workers across Canada – including 70% of workers making under $25 000 do not have paid sick days. DWHN member and nurse, Carolina Jimenez, told the group on Saturday that paid sick days is a “protective“ policy. According to the above report, parents who have paid sick days are 20 % less likely to send sick children to school. That reduces the risk of spreading any infectious disease. It calls for a minimum of 7 days permanent sick leave for any job and 14 days paid for emergencies like COVID-19. Ms. Jimenez added, “people should not be in the financial position to choose between their livelihoods and public health.”

A real safe return to school

Paid sick days are central to any hope of a safe return to school. Rachel Huot of Ontario Parent Action Network (OPAN) put out a simple practical message: “ the more children you have, the more time they spend being sick.” With COVID-19 looming, you can’t call on grandparents to watch children – even if they’re available, so you’re left sending sick kids to school if you don’t have paid sick days. It’s low income, racialized communities that have least access to paid sick days. It’s the same situation for some workers in schools who have many interactions with different adults and students in each building.

Ms. Huot did point out that tremendous pressure from parents, education and health workers as well as communities in general have managed to get the Ford government to loosen its purse strings a bit even if most of the money for added safety measures is coming from Ottawa. The other good news is that varied groups like OPAN, OEWU and DWHN are putting their ample resources and connections together to fight for safety and decent treatment of families and communities in peril.