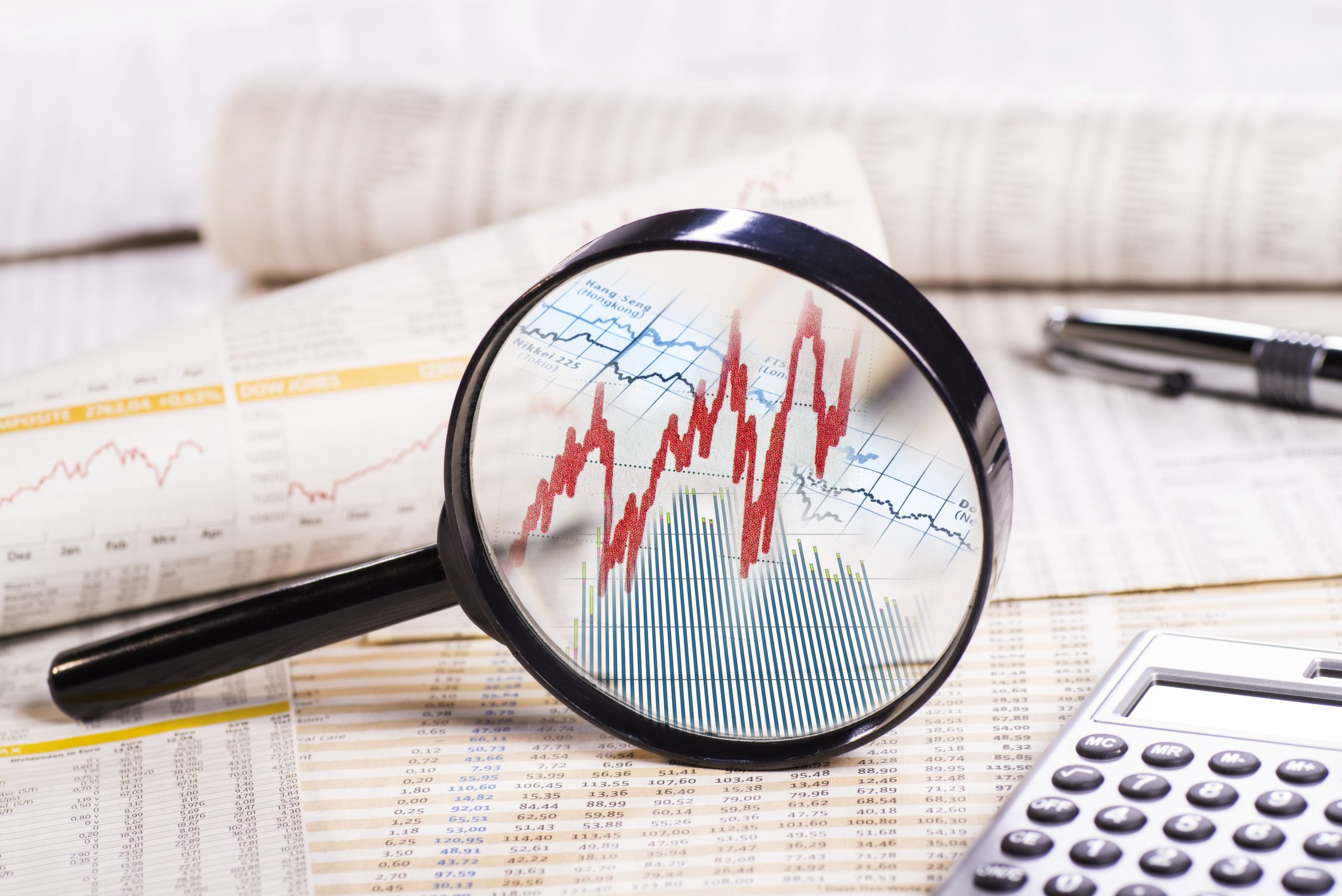 Get out your magnifying glasses; last week the Ministry of Education Ontario (MOE) released funding figures for the 2021-22 school year.

First – let’s remember that the billions of dollars Ontarians shell out each year, covers the education of about 2 056 000 students.

With that in mind, let’s start with Grants For Student Needs (GSNs). These are the fundamental amounts the province spends on elementary and secondary public education and they’re meant to cover the cost of running schools – paying for salaries, books, computers, transporting kids, special programmes, maintenance  and so on. This year the GSNs for school boards across the province amount to $25.6 billion. That translates to spending per pupil of $12 686 which the Ministry says is an increase of 1.2 percent or $152 per student from 2020-21.

We’ve barely got past the first couple of paragraphs before slumping into the weeds. Education Minister Stephen Lecce’s claim that “Our government is investing more in public education than any government in Ontario history,” sidesteps essential information, according to Canadian Centre for Policy Alternatives (CCPA), economist, Ricardo Tranjan. That $12 686 per pupil spending bears a closer look.

Here’s the trend in spending per pupil the Ministry puts out to support this claim:


Note: the figures in this table may be found on the MOE Education Funding site

Ricardo Tranjan says this ascending expenditure on our kids’ education ignores increasing inflation and enrolment variations over the years. Funding is actually falling when you take this into account.

By his calculations, looking at spending per pupil in light of 2021 dollars, funding looks more like this: 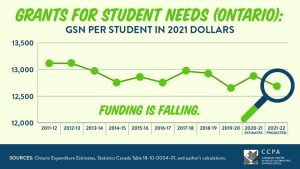 He also points out that the Ministry didn’t spend all the money it projected for 2020-21.  It’s 2020-21 projections (p4) compared to its revised estimates recently released (p4) show a difference of about $489 million.

In its memo – Planning for the 2021-22 School year  the MOE describes another  “investment”, the Priorities and Partnership Fund (PPF)  amounting to $487.9 million. It will mostly be used to maintain physical distancing at schools through additional staffing at school boards ($304 million). The remainder is divided up as follows:

The Ford government is also kindly allowing school boards to dig into their reserve funds – once again – to the tune of 2 percent of their budgets. This is the same situation as last year, when the government allowed boards to spend up to $244 million of these reserves  – if they had the money left over from paying for commitments like capital projects and retirement gratuities for staff. This year, the Ministry will cover extra costs if boards end up spending more than 2 percent of their reserves. How that will happen is not clear.

Boards will have to budget for just half of the amounts noted above – including access to their own reserves- to cover half the school year.

Other highlights of the Ministry’s announcement:

Back below the clouds

So, what does all this mean for local boards? This is what it looked like at a special meeting of the Toronto District School Board last Friday (May7). As the largest board in the country, planning is a key issue – but as mentioned above, staff may only budget for ½ of the amounts allocated to these areas:

The staffing pocket, for instance, will only have $15.75 million with which to plan for an entire school year despite what the Ministry says about finalizing its spending plans sometime in the Fall. This is supposed to cover teachers, administration, caretakers, trades people, secretaries, teaching assistants and other support staff.

There is another issue regarding Secondary teacher staffing. And here we come back again to the Ministry’s fixation with mandatory online learning. It assumes that about 8 percent of secondary students will be taking those online courses in 2021-22. For the TDSB, it means that just at a time when young people need contact with teachers, there will be about a $2.9 million staff funding cut which translates to 26 fewer secondary teachers next year. That trend of students taking online courses, the Ministry says, will actually grow to 16 percent in 2022-23 and 26 percent for 2023-24. Secondary staffing will fall in proportion to this. It may not make much difference one way or the other but, the board is waiting for information as to whether online learning undertaken by secondary students over the past year could be used to make up their requirement.

There is also a question about elementary guidance counsellors. Last week, in a media release, Elementary Teachers of Toronto (ETT) said that the TDSB is removing “qualified Guidance Counsellors form elementary schools next year.” According to ETT Vice President Jamie Thom, the Board has merged the position of  guidance counsellor with that of so-called “student success teachers” and removed the requirement that any of the approximately 67 staff have guidance qualifications. TDSB spokesperson, Ryan Bird told School that the board isn’t reducing staff numbers but focusing support on grades 6 to 9 to aid the transition from elementary to secondary school – “closing learning gaps, mental health and well-being and career exploration.” He added that this change is meant to be permanent. The question remains open as to what support the younger students will receive. There are fewer pockets in which to find the money and they are getting thin. 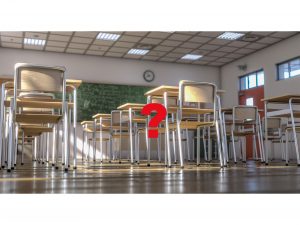 What about kids coming back to school? Like the rest of us the TDSB doesn’t know what the COVID situation will be like in the Fall and isn’t working with the assurance of a full year’s staffing allocation – so the plan is to abandon a central virtual school as it ran this past year and somehow return virtual learning to local schools or clusters of them. This is in hope that the COVID numbers will fall enough that enough parents will return their kids to their home schools. That would will enable local schools or clusters of them,  to offer online school for those who aren’t ready to go back.

Trustee Yalini Rajakulasingam asked about $2.2 million the board will have available to help students re-engage with school and catch up on reading. This is the TDSB’s portion of the $20 million allocated by the Ministry for re-engagement and reading. Given the inequities across the system exacerbated by a year of COVID, she said “Is this enough? It sounds very small for the tremendous work ahead.” Associate Director Craig Snider agreed with her leaving Interim Director Karen Falconer looking for another pocket from which to find that much-needed money.

There might have been some help from a grant the TDSB received previously to involve parents to encourage student achievement, human rights, equity and well-being. In 2017-18 this Parent Reaching Out grant amounted to $483 838. In the thick of COVID, during 2020 -21, that fund had dropped 70 percent to $131 563. For the coming year, it’s climbed back up to $253 000 a little more than half of what it was 4 years ago.

It also looks like the TDSB is going to have to get creative around its plans to deal with equity and anti-Black racism, since it hasn’t yet learned how much money it will have to put towards this. Associate Director Curtis Innis plans to use funds for re-engagement and mental health to pursue the boards equity aspirations, but again, there’s not much earmarked by the Ministry for this.

Trustee David Smith asked about class sizes. The board has yet to receive approval for secondary class sizes- whether they’ll run every day. As far as elementary class size is concerned, the board won’t know how large they will be until it receives commitments from parents about whether or not their kids will be coming back to school. Class sizes will remain within the guidelines of teachers’ collective agreements. But there’s a Catch-22 here, as parents will want to know that classes are small enough to be safe before they’re willing to make that commitment. The Ministry is not providing a lot of direction, just as the Ford government behind it is vague and faltering in its handling of the pandemic in general.

COVID is not over – neither is this budget process.