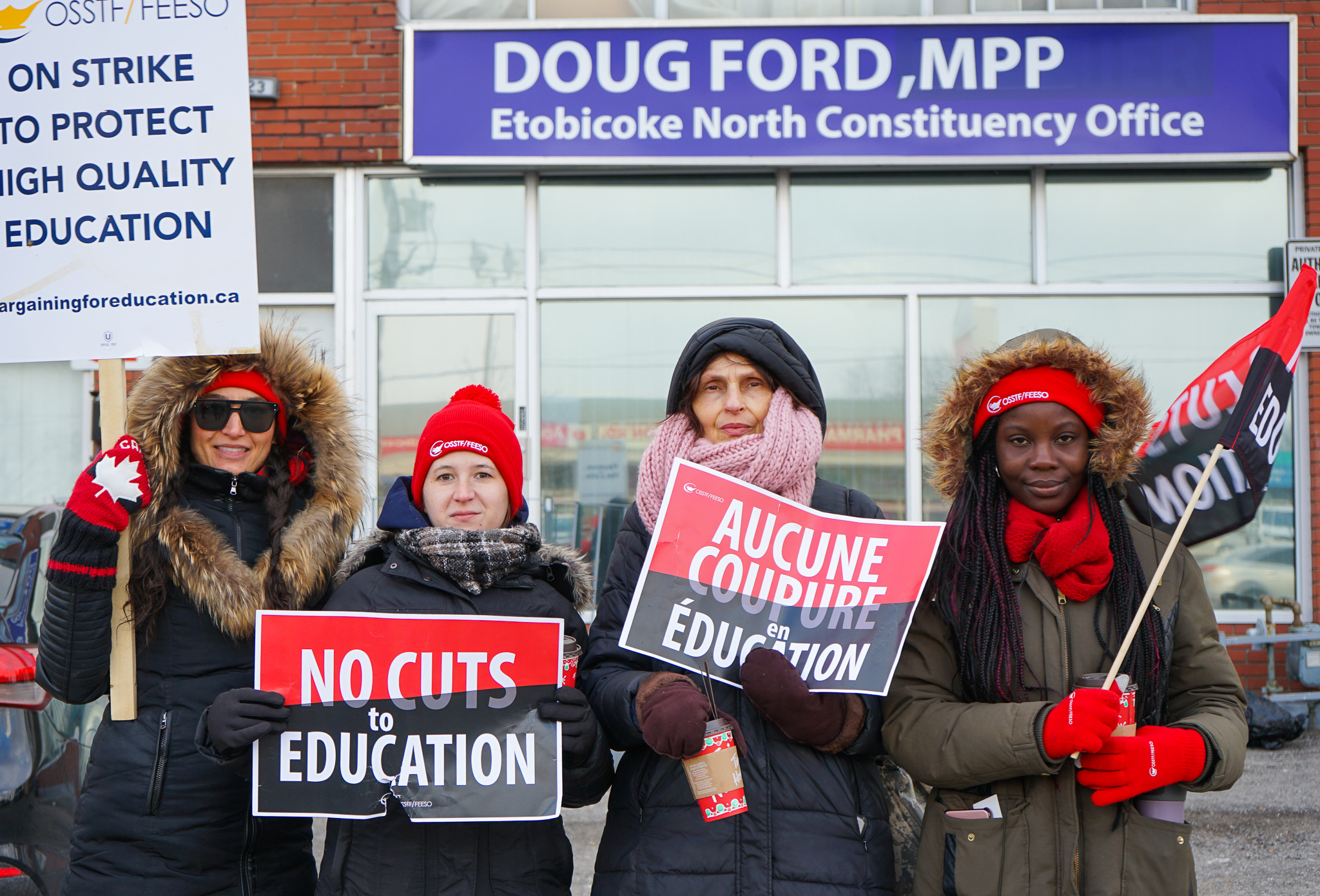 OSSTF Tentative Agreement: Why I am Voting No

Some people believe that education workers should be fearful that the government would impose worse conditions should we continue to fight under the current circumstances – education workers should be fearful that an imposed contract would include more than the five percent increase in student to teacher ratio and result in a loss of even more jobs.

Some people believe that education workers should make whatever sacrifice asked of us by this government to create ‘stability’ under the circumstances – education workers should sacrifice the integrity of the education system and the learning conditions of students by accepting mandatory ‘implied consent’ e-learning.  Accept and give in.  Gratitude? Fear? Sacrifice? Do those sound like well-reasoned arguments in favor of capitulating on the ‘NO CUTS to Education’ demands education workers were striking to achieve?

I am an education worker.

If you share in any of the beliefs I’ve listed above, this piece may strike you as ungrateful; as you read it, it may feel like I have unrealistic expectations under the circumstances; it may sound as though I am calling for disruptive conflict at a time when what we need is ‘stability’.

I am grateful; I am also aware.  I have realistic expectations of what can be achieved negotiating under the School Boards Collective Bargaining Act under the circumstances; I also understand the consequences of accepting this contract. I hear the calls for calm, and I care deeply about students; I am also conscious that confronting reality involves conflict.

We need to confront reality.

The reality is that the education system (and the public service in general) is in the midst of a 3-decade attack on funding. What started as cuts under the Harris’ PCs, evolved into a search for efficiencies under the McGuinty and Wynne Liberals, continues today as ‘modernization’ under the Ford PCs.  Three decades of cuts have left education in a state of disrepair.  It has eroded education infrastructure, under-resourced classrooms and imposed an unfair physical and mental toll on teachers – teachers who have been trying to hold things together with self-funded school supplies and personal sacrifice.

The reality is that our leadership continues to find reasons to accept collective agreements, not because they are good deals, but because fear, gratitude, sacrifice are called for ‘under the circumstances’.  This time is no different.  Union leadership has agreed to a tentative agreement substantively the same as what they rejected in February. Leadership is asking us to ratify a tentative agreement that was so far from the expectations of workers, and the public, that historic strike action was organized and all four education unions marched together on Queen’s Park to show solidarity in that decision.

Education workers understand this reality; this is not the contract we were fighting to achieve.

So here we are.  Asked to ratify an agreement that workers and the public understand is bad because… fear, gratitude and sacrifice.

How can I vote yes to an agreement that sacrifices jobs of members?

Before this government took power, the funding ratio was 22:1.  If the tentative agreement is ratified, and mandatory, or ‘implied consent’ e-learning is factored in, the funding ratio will be 23.5:1 or more. Voting yes means signing off on a potential 7% reduction in teaching staff.

How can I vote yes to an agreement that sacrifices the quality of education and well-being of students?

Reducing the number of caring adults in a school by 7%, limiting the number of course offerings, and forcing students onto a learning platform that we know is inequitable and less effective sacrifices the quality of education and well-being of students

How can I vote yes to an agreement that includes all of the things a broad coalition of community members came together to fight against?

We engaged in community pickets and asked for support in our fight for NO CUTS.  People proudly signed their names, put up NO CUTS signs, and wore pins; parents and community members helped organize walk-ins and solidarity actions, and in building these coalitions, we made an implicit commitment to fight for the public good. Am I to betray that commitment?

I cannot. I will not.

Standing up in solidarity and the demand for NO CUTS in defense of the public good was a starting point of a much larger fight to reverse course on 20+ years of education policy. Sitting back down in fear, gratitude, or sacrifice in defense of our own self-interest is consent to further erosion of the system and potentially reverses all of the progress we have made this year together.

I ask that you confront this reality before you vote.