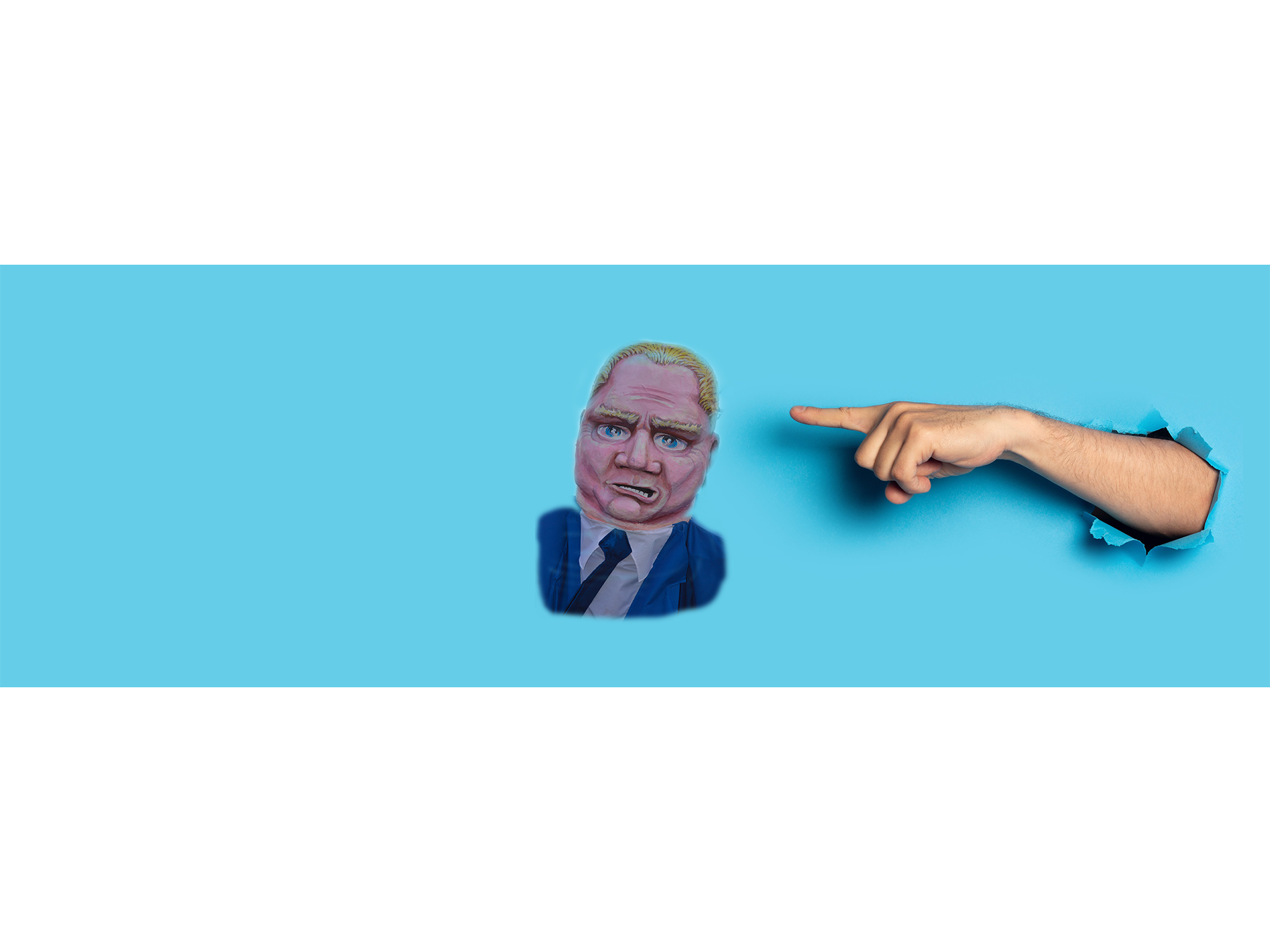 For sure, with an 83 seat Tory majority chosen by 18 percent of eligible voters- you couldn’t be blamed for throwing up your hands and finding a safe place to weather the inevitable assaults on the public good by a party that is better at inflicting them than anybody: Don’t poke the bear.

You’d certainly be right to despair over local electoral possibilities for at least stemming the tide of the Ford government. Look at how few candidates are running for Toronto City council in the upcoming municipal elections. The Toronto Star reports there are less than half the number of candidates who ran in the 2018 election – key councillors like Mike Layton and Joe Cressy have left altogether and taken years of political experience with them. The job has simply become too much for councillors, with about 110 000 residents for each ward. They can’t connect with nearly that many people. It’s too expensive to run for office and if you happen be a newcomer with fresh ideas squaring off against an incumbent, the hill is that much steeper. So, Mayor John Tory, will get re-elected, no doubt if for no other reason than that those who oppose him don’t have his name recognition, connections and the deep pockets needed to replace him. 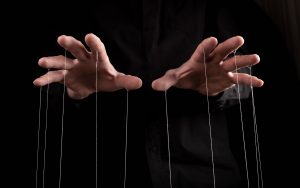 Doug Ford’s Tories have worked consistently to eviscerate local democracy, arbitrarily cutting Toronto City Council from 47 to 25 seats as soon as they were elected in 2018. It didn’t matter that Mr. Ford neglected to mention the plan during the provincial election that year, nor that the cuts happened in the middle of an election cycle. Had he been stopped by the courts, Mr. Ford would have simply overridden their decision by invoking Section 33 of the Charter – the Notwithstanding Clause  – to get his way – as he did when the Ontario Superior court tossed his Protecting Ontario Elections Act designed to make it hard for third parties to campaign against him.

This bear is fundamentally dishonest, has little regard for democracy and will use every opportunity to hack away at it. Watching the Ford government in action offers a lesson about civic disruption that no teachers should pass up. They can start right off with current events by talking about Bill 3 – the Strong Mayors, Building Homes Act.  Naturally, there’s nothing in it about building housing – affordable or otherwise. That’s just a bit of bait for the hook, since the real purpose of Bill 3 is to give more power to mayors of Ottawa and Toronto while putting them on notice that they must consider provincial priorities – whatever they might be – when asserting their new authority to veto a city council decision, to hire senior staff and set a budget.

A reasonable teacher would point out that we just had an election and ask students what they thought of Doug Ford, again, not mentioning changing democratic processes without consulting anyone affected by the switch. It wasn’t in the Tory platform. Why not? It wasn’t mentioned in debates. What catastrophe befell us in the middle of summer vacations that made it so urgent to bring in a strong mayor system of local government?

Teachers might raise the question of what planning means when a government just up and changes something critical like who wields power in a city. There are so many hard choices to make about what to do with that power: housing, healthcare, transit, homelessness and so on. Why not look at changing the powers of cities to deal with issues they face like the ability to raise funds independently – something that the province just won’t let cities do.

This latest attack on local democracy is all the more disturbing because the strong powers Doug Ford plans to hand over to mayors come with above-noted caveat about following provincial priorities – something that turns an elected mayor into a servant of Queen’s Park. As former Toronto mayors David Crombie, Barbara Hall, Art Eggleton, David Miller and John Sewell wrote in a recent letter:

“Provincial and federal governments are characterized by political party control, strict messaging, extreme reliance on polls, and slavish adherence to the party leader. City government has always been different: a place that, at best, involves residents in decisions that affect their lives and has debates between different points of view, often reaching compromises on difficult issues, in the council. The proposal to allow a mayor to have veto power over issues of provincial interest and set the budget undermines exactly that and gives the province too much influence over decisions that should be up to Torontonians and their elected officials. Doing so will lead to worse outcomes and far fewer opportunities for residents to have a real voice.”

Education and the public good

What does all of this have to do with education? The Ford government – and too many of those that preceded it aren’t much interested in addressing the public good overall: health, education, environment, transit, social services and other features that make life decent for citizens. Their focus is necessarily on the next election cycle – keeping taxes down, tailoring policies to suit the people who usually vote for them, making sure money flows into party coffers by keeping corporate constituents happy. There’s no broad plan here – little idea of what hospitals ought to do to best serve communities, no real interest in what people who can’t work ought to receive in order to preserve any dignity, no thought given to the environment beyond its economic possibilities like the recently announced government plan to capitalize on “critical minerals” mining in northern Ontario to provide materials for technology industries.

“With few exceptions, the project of democratizing public goods has fallen into disrepute in the popular imagination as the logic of the marketplace undermines the most basic solidarities. The consequences include not only a weakened state but a growing sense of insecurity, cynicism and political retreat on the part of the general public.”1

There’s little room here to give any thought to what Ontario kids need to learn that will help them become engaged citizens in a political world that would prefer them to just be good workers and shoppers.

Doug Ford made this absolutely clear during the last leaders debate before the June election. “… the purpose of our education system – to make sure we prepare the kids for the jobs (sic) when they get out of school – jobs of the future … and we changed the curriculum to make sure we focused on financial literacy.” In a millisecond he could have slipped in something about being engaged citizens or going to safe schools.

What Mr. Ford did do was make it plain that education, like health, housing and local government is a commodity, not a public good. 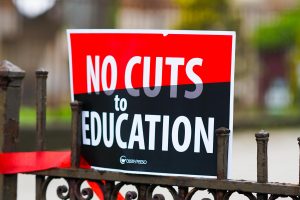 It’s something to be purchased on the cheap and used to deliver technicians who can participate effectively in a market economy. It’s why one of the first acts of this government back in 2018 was to cancel the study group working on a curriculum about Indigenous people. History is irrelevant when you’re only interested in preparing young people to work and consume. It’s why we’ve seen continued cuts to schools since the Ford government took over in 2018: $430 million less for schools for 2019-20; $800 less per student for 2022-23. Schools boards had to dip into reserve funds to help cover costs of dealing with COVID-19 during the pandemic. In 2019-20 education was to be further rationalized by increasing class sizes and cutting 10 000 teachers. The plan was revised to a mere 6 000 teachers amidst public outcry.

It is the cold logic behind mandatory e-learning  – originally 4 courses, but now 2 in the face of teacher strikes. The government can pay fewer teachers just as it provides work for friendly corporations like McKinsey and Company who will design online programs for a price.  Why do kids need to be in a classroom with a teacher and other students when they can learn online? Some of them will manage, some will fall by the wayside. It doesn’t matter if the government that funds their education is not interested in engaging students to become strong citizens.

It’s the same thinking that spurred the Tories to offer $225 million over two years to parents who want to hire tutors to help their kids catch up after falling behind during the pandemic. It doesn’t go to schools which would make better use of the money to hire extra staff and pinpoint concerns with students. That would actually support the public good. The handout, on the other hand, circumvents spending on education and sets the tone for more of the same – school vouchers that pretend to offer choice to parents while they strip resources from public schools.

You can see it clearly expressed in the Tories’  Plan to Catch Up  which assures parents their kids will have the full gamut of extra-curricular activities – delivered, as always, for free by teachers. Students get the same health and safety measures previously brought in by the Ministry of Education, along with the promise to build new schools that has been repeated for ages. There’s the above-mentioned tutoring support and some vague references to mental health support. In contrast, just in case you missed the leaders’ debate before the election, there are a lot more specifics on the government’s plan to prepare students for jobs of the future. How that is going to help children who need to come back from the unprecedented blow of the pandemic, is a mystery.

If you’d like to see a back-to-school plan, that views learning as a public good, look no further than Catching Up Together: A plan for Ontario’s Schools put out by the Canadian Centre for Policy Alternatives (CCPA). The document actually involves planning:  spending $4.3 billion more annually to reduce class sizes from grades 4 to 12 while increasing teaching staff from kindergarten to grade 3 to give kids more support in their classrooms. The plan also includes increasing early childhood educators’ (ECE) pay in order to acknowledge their critical work, setting up mental health teams to work in all schools, ending mandatory e-learning along with any hybrid and remote learning currently in use and dealing with the massive backlog of repairs while increasing the maintenance budget for schools. 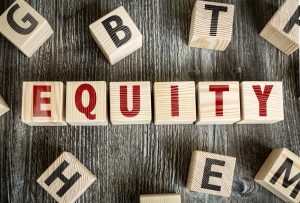 Good privatizers will undoubtedly ask: “Where’s all that money going to come from?” CCPA’s answer: Reverse the things that you’ve been doing to put public services in a huge vise. Cancel promised cuts to personal and corporate income taxes. Actually, do what only the Green Party had the nerve to suggest and increase personal income taxes. Middle-income earners might pay up to $110 more per year. People with incomes in the top 10 percent would pay about $1 300 more each year, while those with an annual income north of $435 000 would see a $6 500 increase. All of the above, the report says, would bring in about $2.6 billion per year. The remaining $1.7 billion needed to support and rebuild education could be found by reconsidering other tax cuts and credits as well as dropping stupid infrastructure projects like Highway 413.

So, here we have an actual plan, not government knee-jerking to the wishes of developers who want to make it easier to build expensive condos in Toronto and Ottawa – not an estimated $6 billion highway cutting a vast swathe through prime agricultural land and our Greenbelt. With its considerable majority, no doubt Doug Ford and his Tories will pick away at local democracy and let services whither while it shrugs and says: “What else can we do, but give people choices as to how they’re going to spend their money?”

But there are alternatives.

The Tories have become less brash and arrogant about stomping all over the public good in Ontario, but it certainly doesn’t mean they’ve stopped or even slowed down. They need to be brought to account by all the groups across the province that have been fighting them for years. The big question is how to co-ordinate the efforts of those who care about democracy and public goods that support it, because this bear must be poked.