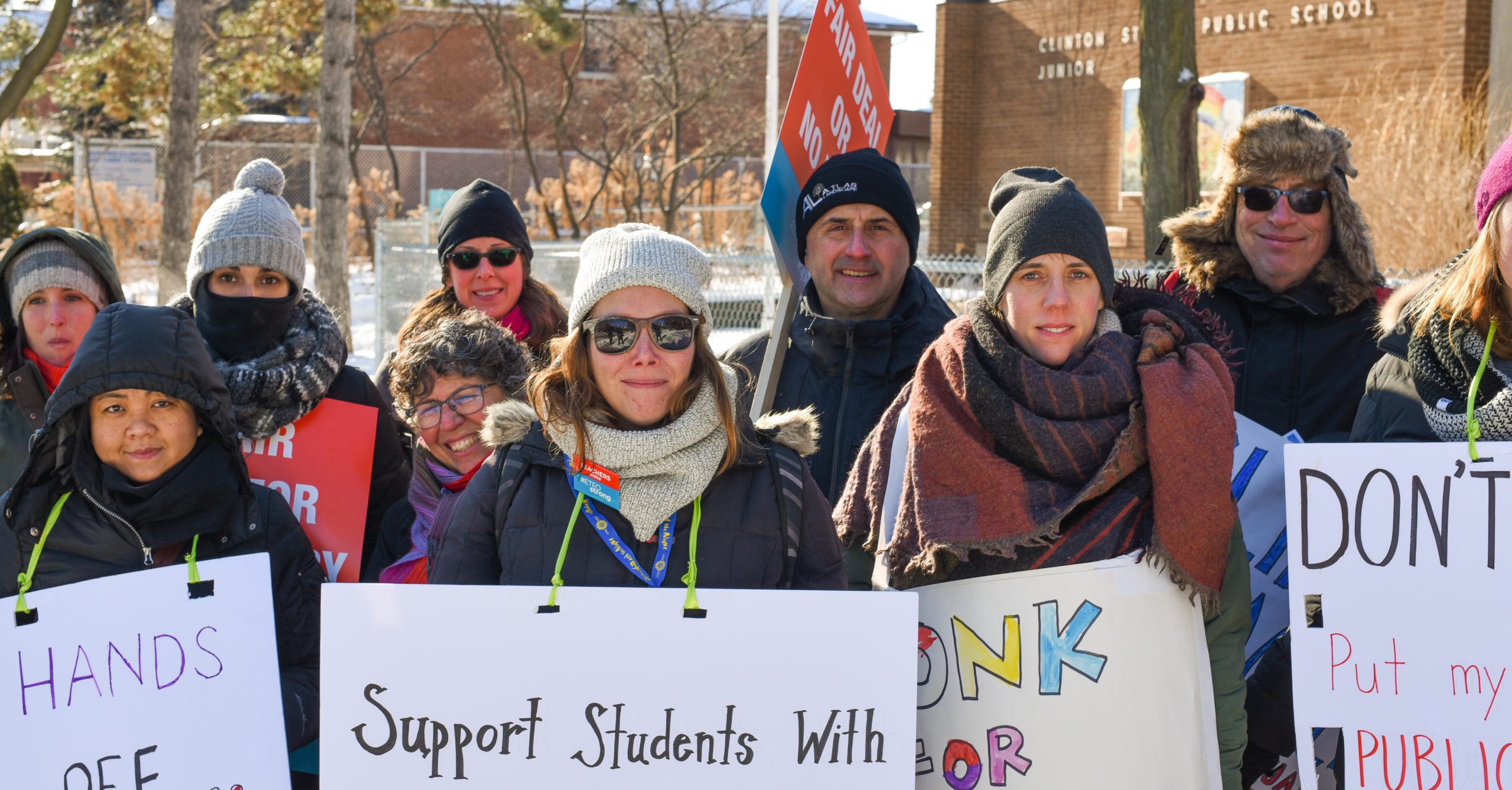 Elementary educators are taking the next step in job actions that began weeks ago. All teachers at Catholic school boards across Ontario will be on strike for a day tomorrow. The Elementary Teachers’ Federation of Ontario (ETFO) began a series of rotating strikes in Toronto, York Region and Ottawa-Carleton today as part of its plan to up the ante with the Ford government. More of them are scheduled across the province in the next week. The union, acting for teachers, occasional teachers, designated early childhood educators, professional support personnel and education support personnel notified school boards across the province of the series of one-day strikes. The public elementary union is up against the Ford government over issues including caps to class size, more support for students in special education, improvements to health and safety protection in the classrooms and a written guarantee that full-day kindergarten will continue with support from early childhood educators. They are also looking for a pay increase in line with inflation.

Judging from Ford government rhetoric, you’d think that more pay was the only thing teachers are on about. Just today Education Minister Stephen Lecce warned teachers’ unions via CBC’s Metro Morning that  “it is in your court to provide a pathway for a deal because the government has made significant moves”  referring to his plan to increase secondary school class size to only 25 rather than 28 and add only 2 mandatory e-learning course. He didn’t mention what improvements his government has made to sweeten the deal for elementary educators, but stressed that he was going to focus on more “investment in students; not in compensation” once again painting them as too highly paid to need a cost of living increase. His boss, Doug Ford agreed, saying in a press conference on Friday, that unions were mostly concerned about wages adding that educators who voted overwhelmingly to support them in their call for strike action, had poor leadership. 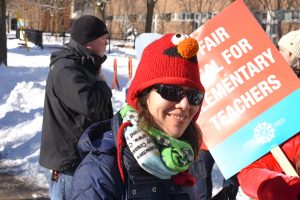 School talked to some of those educators walking the picket lines in downtown Toronto this morning and got a different story. One teacher from Essex PS said “they always focus on the pay raise, but I haven’t heard one teacher talk about it.” A group of educators at Clinton PS agreed, adding that better supports for special needs students played a large part in their decision to go out on strike. At Ryerson CS picketers added that it’s about violence in the classroom and no support for high-needs students. Another teacher outside King Edward PS told School  that she was a student when teachers went out on strike in 1997. Since then she’s come to realize just how hard it is to teach young people. She said that this action isn’t at all about wages; she doesn’t care so much about them. It’s about trying to work around the tough conditions in the classroom with so few resources. That Stephen Lecce and Doug Ford want to “demonize” teachers as being wage-driven is insulting.

Teachers at several schools  spoke about violence in their classrooms – kids throwing chairs and attacking teachers because there just don’t seem to be the resources to help them cope with whatever it is driving them to lose control. An occasional teacher related how he’s filed 4 incident reports involving violence in the past few months – something that would have been rare even a decade ago.

Special education was a big factor for people on the picket lines this morning. A teacher who has spent 14 years at Rawlinson CS explained that lack of

support for needy students has been the one major change in her time there. She has a class of 30 students, 10 of whom have Individual Education Plans (IEPs) for special learning and/or social/emotional needs. But who is there to support them? She argued that the special education issue created a two class system in schools: one for students whose parents could afford to pay for outside help like tutoring and another for those without the money. Another teacher at Essex PS teaches a grade 1/2 split class with “two kids on the (autism) spectrum. I’ve been lucky this year because I’ve got an ed(ucation) assistant, but not everybody does.”

Stephen Lecce told Metro Morning today that his government  has already received 120 000 applications for the  up-to $60 per day on offer to cover child-care expenses while educators are on strike. He says the government will give $48 million back to parents from pay teachers will lose and that it will cost roughly $300 000 to do this. Asked for their reactions, teachers on the line this morning saw it as a “bribe” a ploy to get parents to side with the government.  One of them pointed out that Ford had run his election as a “buck-a-beer” campaign and that this was nothing more than “blowing smoke,” a distraction as Mr. Lecce claims he’s on the “parents” side while cutting budgets, increasing class size and getting rid of educators.

At Dovercourt PS, Krista, a parent on the school’s advisory committee believed that  parents will continue to support educators through the turmoil. The parent movement has already been involved step-by-step in the process that’s led to this week’s strikes: petitions, actions like school “walk-ins” and other demonstrations of support. She added that “the government doesn’t have their act together in terms of bargaining in good faith.” It doesn’t realize how much support for teachers there is across the province and how all its talk of supporting kids and parents is “falling flat.”  If government members listened to parents  she says “they wouldn’t be making cuts.”  About the $60 dollar a day offer: “I feel it’s insulting. If you have that kind of money to do that, why not put it into programming and into schools.”

She certainly has a point. Since the Ford government took office 18 months ago, it has talked about being “for the people” but has consistently cut money, resources and workers from from a school system that was already in trouble from crumbling buildings to students left out of the loop because they don’t have the support they need. Right now, educators are fighting for a holding pattern; for problems to not get worse – not for anything new. Educators are stepping up and calling out the Ford government on its tactic of offering back a little of what it took as it incorrectly claims teachers are only out for a wage increase. 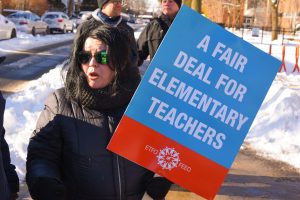