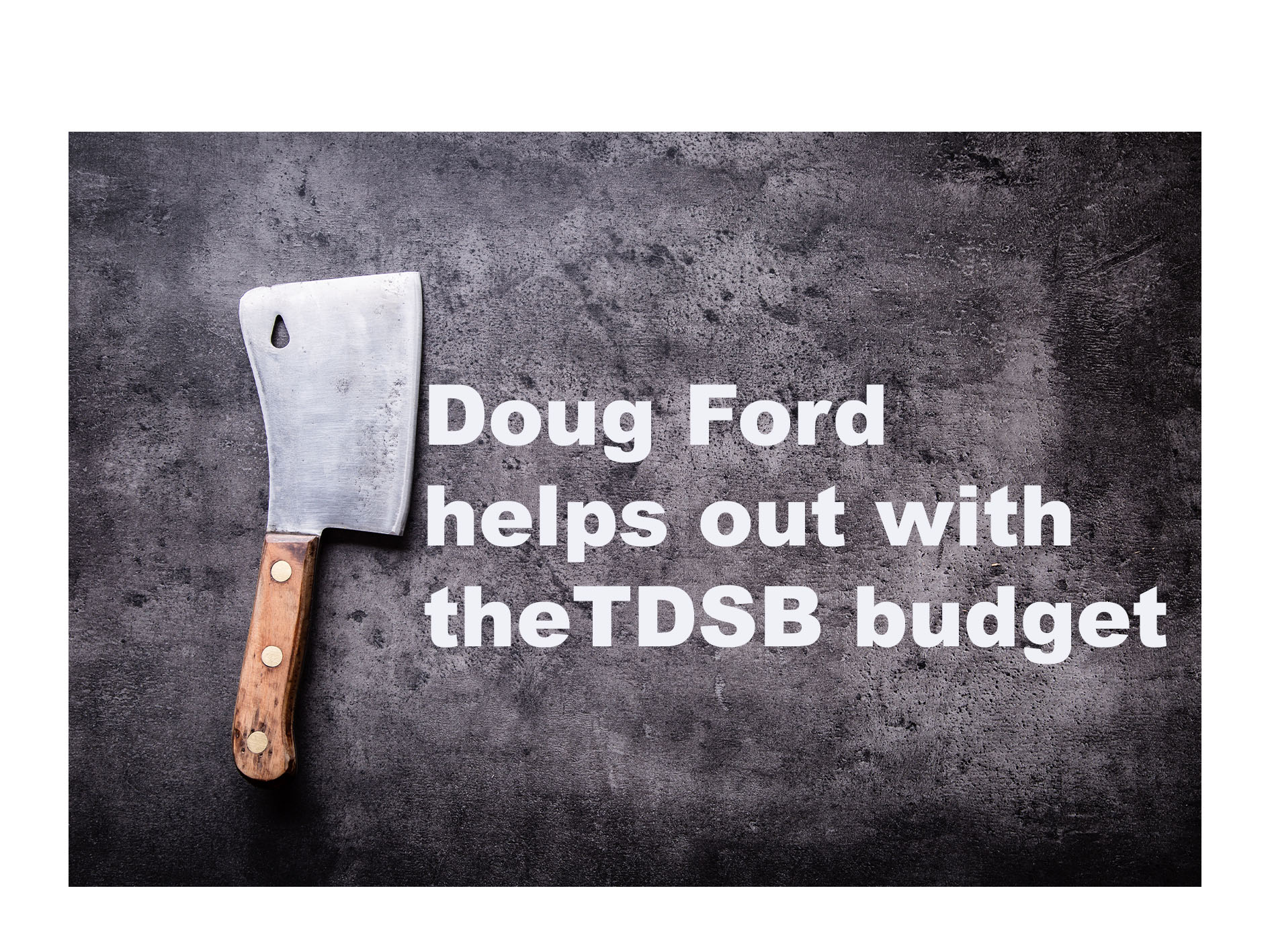 It was a Doug Ford “surprise!”

Just as the TDSB was about to release its budget to Trustees on May 13, the Ministry of Education told it to find another $13 million in its pockets. That left the Board with a total of $67.8 million to chew off over the next two years.

On top of the teacher reductions brought about by increasing class sizes, there are more cuts coming for staff at all levels and programs as well as fees for some activities.

Though there hasn’t been all that much in the local media about it, the budget cuts to Canada’s largest school board is like a hurricane hitting an old house. There will be something left, but what will it be worth?

What was supposed to drive the budget

As recently as February the TDSB  said that the 2019-20 budget would rest on a foundation that included:

Whether or not you agree with these aims or think they go far enough, it’s worth keeping them in mind as we go over what has happened to next year’s budget – and the one for 2020-21 as Doug Ford’s chickens come home to roost at the TDSB.

What really drove the budget

It was cutting $47.8 million in 2019-20 and $20 million in 2020-21. The TDSB has a little wiggle room provided by the $20 million – to ease the cuts a bit for the first year of this two-year plan. But Director John Malloy made it clear in his presentation to trustees, the whole plan must be approved or the province won’t accept it.

Trustees have very little control over where they can move money and they are operating under fire from Doug Ford who calls TDSB’s budget deficit figures “reckless.” Trustee Manna Wong countered that the Ministry of Education has “all our data”, so how can it not know what the Board faces. Mr. Ford has a story he wants to tell and will stick with it because it suits his purpose to cut government by at least 4 percent.

You can see below a chart outlining the proposed changes to the way things work at the Board. It’s an attempt to simplify what the proposals the TDSB put out at the end of last week.

But here are some highlights:

Taking a very big hit, are teachers and other staff working centrally for the Board to support teachers and schools. For example, there will be 29 fewer coaches to help classroom teachers deliver the curriculum from Kindergarten to grade 12. Early reading coaches will be down by 8 positions and Guidance support sees 15 fewer staff. Teachers acting as consultants in areas like the Arts, Math, Literacy, Science, Social Studies, Music, ESL, FSL and improving kids chances in school will 32 fewer. Taken together, there will 86 teaching positions lost to the Board. Trustee Jennifer Story told School Magazine “ it’s a sad day for the TDSB to have to make cuts that move closer to the classroom.”

And it’s not just the fact that there will be fewer people to meet the same needs. All these teachers have to go back to teaching positions at schools. If they have seniority over more recently hired teachers, they may be in a position to bump less-senior teachers out of a job. School Magazine asked Trustee Shelley Laskin about this possibility. Ms. Laskin said that she didn’t have details yet but had been told there will be few job losses. Trustee Story said that the collective agreement with teachers dictates that central staff returning to classrooms will displace less senior teachers. 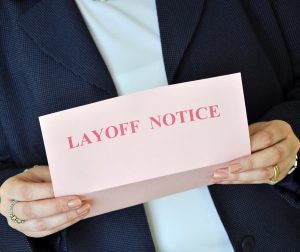 She added that these central staff were always there to support front-line teachers, but now many will be gone. There is also the worry that in future years more centrally assigned teachers will have to return to the classrooms to keep class sizes a bit smaller. More teachers, recently hired to reflect the backgrounds of the students they teach, may be gone.

Teachers aren’t the only people helping kids at the TDSB. There is a large contingent of people needed to support students and keep schools running. Principals who work out of different Board office, run Special Education, Early Years, Continuing Education and anti-racism program among others. They are in charge of Outdoor Education and the Urban and Indigenous Education Centre. There will be 13 of them gone in September. The Board will have 10 fewer psychologists to help assess the needs of students. There will be 15 fewer people to support libraries; 23 fewer music instructors to travel from school to school offering programs in strings and steel pan – long an important part of school and neighbourhood culture. 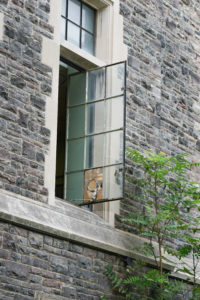 Particularly awful, when the TDSB faces about a $4 billion shortfall in repairs and maintenance to schools, Board management proposes cutting 8 trades staff, 10 summer employment students and – take note – 52 caretakers. Caretakers literally keep schools going. For a board that is already teetering under the effects of mould, falling ceiling tiles, tar dripping down into classrooms, outdated heating and cooling systems, old leaky windows, cracked floors, unpainted buildings – the list goes on – you need not fewer, but more caretakers just to keep the schools safe.

CUPE 4400 is the union that represents these and other education workers at the TDSB. Its local president John Weatherup, says that the losses of his members adds up closer to 100 since more than 30 have already been told that they won’t have jobs in September. He adds that between 20 and 30 office staff as well as more than 30 Special Education Assistants will need to look for other work in September.

These are all losses to a board that has seen stable enrollment over the past 5 years.

There’s more. For urban kids, Outdoor Education programs have long been critical parts of school life. Many kids have little way of getting out of the city or getting up close to forests and the animals in them. The Board proposes that 4 of the 10 Outdoor Learning Centres be closed. For those that remain open, it will cost more for kids to visit them.

Depending on a school’s position on the Learning Opportunities Index that measures neighbourhood income, education, family financial stability and overall stress – fees will go up. For a school low on the index, fees will go up to $5 per child for a day trip and $50 overnight if it can manage to book a trip in one of the fewer centres. On the other hand, well-to-do students will pay $15 for a day trip and $150 to stay overnight.

TDSB management is doing a little dodge with transportation to those centres. Starting in 2020 -21 it will move $700 000 in transportation costs off its books and onto the school budgets. A saving for the Board, but not for its schools who will have to pony up the cost for getting kids to the Outdoor Education centres. It also speaks vaguely about how it could “restructure staffing and program delivery model”. There are no details about it, but it sounds like a staffing cut.

On the topic of schools, their budgets could be cut by 5 percent, if the management proposal 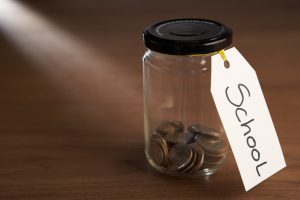 is passed by trustees. The amount of the cut would depend upon a school’s size, family income and access to fundraising money. This last point will become a greater issue as schools will compete more for the same money. It also shows where schools are headed: they will need more access to private money to run simple events like sports, days, plays, field trips and artist visits. As the TDSB has less and less money to even out the already glaring disparities between schools, any notion of equity goes out the window. Trustee Chris Moise understands this well. With his downtown schools in neighbourhoods marked by poverty, he says that his schools need extra money for there to be equity in the Board.

It would also cut the elementary school International Baccalaureate (IB) Program, that it says fosters collaboration, leadership, critical thinking and a sense of global citizenship – all elements of what should be going on in classrooms anyway. It would keep the secondary school IB Program and would help to cover fees for low income students. It doesn’t say what those fees would be. There is also no mention of the number of staff positions that would disappear.

These are some of the main cuts for students, school and programs over the next 2 years. But there is another wrinkle. Just after TDSB trustees received the budget proposal, they asked Board management staff to go back and rework its transportation part of it. That was because to make up the extra $13 million the Ford government lopped off the TDSB budget, Board staff proposed it eliminate busing for all French Immersion and Extended French students. Trustees said this would be too much to handle for the 2019 – 20 school year. Parents wouldn’t be able to make other arrangements in time.

So they bought some time. Board staff presented this plan:

That’s not enough for the government. It wants more money to come out of the 2019-20 budget. So, the trustees were presented this option:

What happens at the end of 2021 and all of this chaos?

So far, at least.