What are GSNs and why are they so important?

A little over a week ago, the Ministry of Education and Training released the annual Grants for Student Needs (GSNs). These grants are what we all pay for education in this province and they are as murky as the water in the bottom of a swamp.

But what’s clear right off the bat is that the Ford government plans to cut education funding. Everything else coming from his Ministry of Education is just noise and distraction.

If you look at Ricardo Tranjan’s article for School Magazine, “Education Funding: If it looks like a cut and hurts like a cut, then it probably is a cut” you can see the overall picture of education funding cuts in this province. Although the Ford government says it’s going to increase the education budget by $1 billion over the next three years, it’s not as much as what was approved last year and doesn’t account for the increased costs through inflation.

What is really happening with the money coming to our schools?

Let’s start with Grants for Student Needs (GSNs). These are the funds sent by the Ministry of Education to school boards to run schools across the province. They amount to about $24.66 billion for the next school year to educate about 2 million students. That’s a little higher than the $24.6 billion in expenses from 2018-19, but don’t forget that the Ford government lowered last year’s expenses with cuts to programs like Education Program-Other grants. 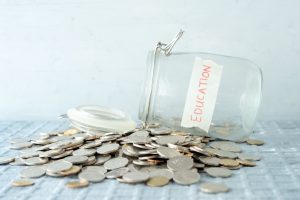 There was also the $100 million that was cut by the Ford government last summer to upgrade schools and make them more environmentally friendly. Then there is $82.5 million for “unallocated amounts” listed in this year’s grants. If they aren’t allocated, the Grants for Student Needs are actually lower than last year.

Grants for Student Needs and the Education budget aren’t the same. The Ford government announced last month it would spend $29.8 billion on education for 2019-20, but the Grants for Student Needs adds up to $24.66 billion. Why the difference? That extra $5 billion includes costs like running the Ministry of Education itself – paying the people who work there for instance. It also includes the Community Services Information and Information Technology Cluster, the I/T service for several ministries, as well as Child Care and Early Years programs

What’s left are the Grants for Student Needs. From that big pocket of money comes everything else the Ministry dictates school boards will get to run their schools and programs.

The largest amount coming out of the Grants for Student Needs pocket is the Pupil Foundation Grant. This pays for salaries of educators, assistants, counsellors and other school board staff. It also funds, books, school supplies, computers and so on. Over the past year the Pupil Foundation Grant was about $11.2 billion. Next year it will be roughly $10.6 billion as the Ford government begins to crank back the number of teaching jobs across the province, by raising average class sizes to 28 in secondary schools and about 24 from grade 4-8

Here’s something that might get you scratching your head. There is a new Attrition Protection Allocation of $1.6 billion that the Ministry says will stop teachers from being laid off as teaching jobs disappear over the next few years. If fewer teachers than expected quit or retire, this fund is supposed to be paid to the school boards to keep the jobs open without having to fire anyone. It’s meant to help Doug Ford keep one of his promises: “Under our government, not one single person will lose their job.”

So – school boards are getting less money to pay for teachers, but an extra amount, in case those teachers don’t quit or retire.

This may be the hallmark of the Ford government – paying lots of money to appear to be saving it. At the end of the day, we may put out $1.6 billion dollars to have fewer teachers, education assistants, coaches, counsellors and everyone else in our schools doing their jobs. It’s a bit like the $30 million Mr. Ford plans to spend on suing the federal government over its carbon tax, after he dropped about $3 billion in revenue by getting rid of Ontario’s cap and trade program. 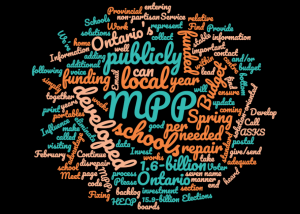 That’s not to say that the government won’t fiddle the numbers somehow so they don’t have to pay as much to protect people from lay-offs. TDSB trustee Shelley Laskin says that the money available for Toronto is based on the number of teachers leaving their jobs over the past 5 years compared to those who might be without a position as class sizes go up. How much actually will be covered is a question TDSB staff are trying to determine. Not covered, she adds, are teachers working centrally – consultants, teacher coaches and others like them, who would go back into the classrooms as the Pupils Foundation Grant shrinks over the next few years. Ms. Laskin “can’t say that no teachers will lose their job.”

Details aren’t available yet from the Toronto Catholic DSB which has lost $30.8 million from its Pupil Foundation Grant overall. The TDSB’s money for students dropped by about $80 million. This includes a loss of $7.9 million because the Ministry will fund fewer Early Childhood Educators (ECE) next year. The Board is also short $9.6 million from that Pupil Foundation Grant because it has to honour its collective agreement with elementary teachers that average class sizes between grade 4 and 8 would be 23.24 not 24.5 kids per class that the Ministry now dictates.

There are many other categories under the Grants for Student Needs. You can scroll through the different grants for Boards and see small increases for services like special education, transportation or money for school buildings in some boards. It varies with each board. But one area worth a closer look is the Learning Opportunities Grant (LOG).

Back in 1998, the Ministry of Education began to offer financial assistance for school boards that had more students at risk of doing poorly in school. These were kids from low income families with few supports to help them, histories of family stress, violence and substance abuse – families struggling to get food and shelter. They would be living in neighbourhoods with few recreational facilities and marked by violence and a poor outlook for the future. Many of these kids might be recent refugees, whose parents were trying to get a foothold in the community.

The purpose of the Learning Opportunities Grant was to give students in these situations a chance – lower class sizes, assistance through teacher aides, tutoring, after school programmes, remedial assistance, recreation and sports programmes and so on. According to a 2017 People for Education article an “expert panel” from 1997 recommended that $400 million be placed in this fund each year. Instead funding was set at $185 million and while it has increased over the past 22 years is still below what the panel said it ought to be – considering inflation.

Unless, there have been some miraculous changes across the province, you’d think the Learning Opportunities Grant should at least stay the same. The needs are certainly out there, especially considering cuts to local health programs, social services, legal aid, criminal injuries compensation and library services. But what’s remarkable is that across the province, the Learning Opportunities Grant has been cut by about $230 million and the cuts are substantial to every school board. York Region for instance is getting only 60 percent of its grant from last year; Lambton-Kent – 54 percent; Thunder Bay Catholic DSB – 50 percent.

Closer to home, the Toronto Catholic Board is now receiving 80 percent of last year’s grant and the TDSB is at 84 percent. The TDSB also lost $28.6 million from another part of it grant, the Local Priorities Fund – money for more special education staff and needy kids.

Another fund, the Education Program- Other grant, was cut back in January. It provided students with jobs as tutors, a chance to return to school, programs for Indigenous students and the like. It has undergone a name change and is now called the Priorities and Partnership Fund which will be “evidence based and outcome focused funding which will be reviewed annually” according to a TDSB briefing. That sounds like another way the province can keep a tighter hold on local spending. The Ford government said that it would amount to $400 million annually, but that number dropped to $185 million when the Grants for Student Needs were announced. School Boards don’t know how much of that they will actually see.

Overall, though the Ford government has added some little increases in parts of their Grants for Student Needs, the serious cuts many people expected are front and centre. They come after decades of underfunding education. The bottom line for the TDSB is that it faces a $54 million shortfall for the coming year and will have to decide in the coming weeks how to deal with it.

So, it’s important to keep an eye out for school boards across the province announcing:

Don’t believe any talk of funding increases until you can see their effects on classrooms and instruction.