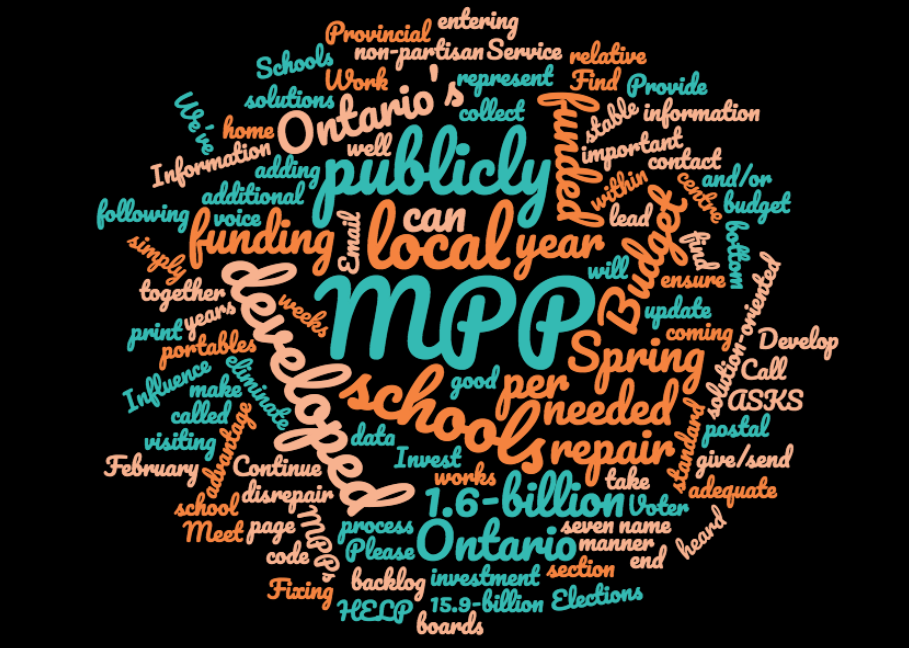 What the poor state of schools means for our kids

This is what we hear from across the province:

These are only a few examples of how $15.9-billion of disrepair in Ontario’s publicly funded schools negatively impacts students, teachers and education workers.

The Fix Our Schools campaign

Founded in Spring 2014 by a handful of west-end Toronto parents, Fix Our Schools evolved quickly to become an Ontario-wide campaign focused on ensuring that:

The Fix Our Schools campaign has always been non-partisan, parent-led and solution-oriented as we’ve worked to build a meaningful base of support across the province and as we’ve built relationships with all political parties and many levels of government to effect change.

The Fix Our Schools campaign is proud of the following notable successes that we’ve been instrumental in achieving:

What we’re currently working on

As part of the pre-budget consultation process for the 2019-20 provincial budget, Fix Our Schools has asked (and will continue to ask!) Doug Ford’s government to:

How you can help

A lot of change is being discussed in the realm of publicly funded education. School conditions are only one aspect of our education system but represent a key opportunity for citizen pressure to yield results from our provincial government. The state of Ontario’s publicly funded school buildings is truly a non-partisan issue – every single person in this province, regardless of political stripes, would agree that if a roof is leaking at a school – we should fix it!

Krista Wylie is an education activist with Fix Our Schools