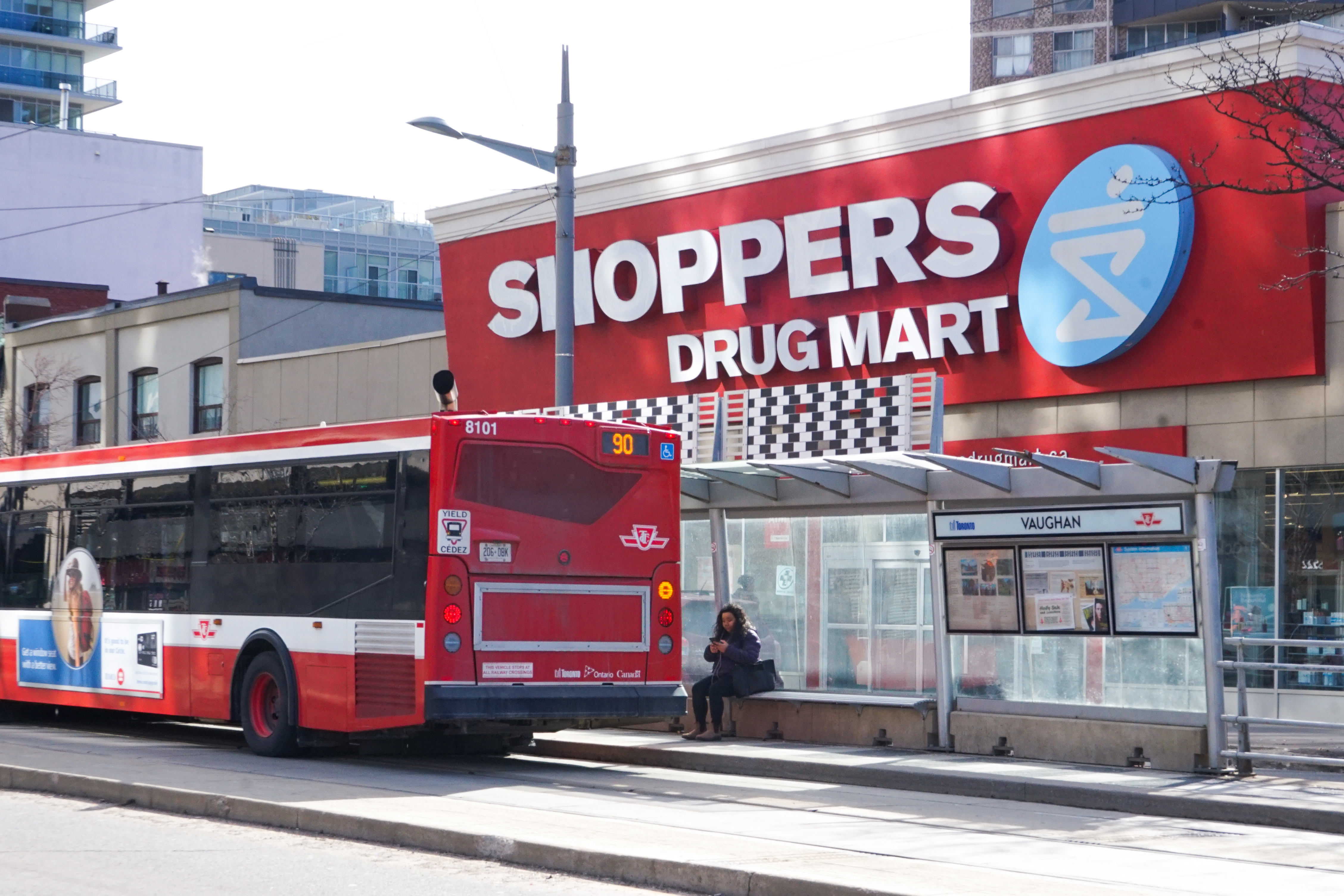 When these streets talk, do we listen? Reflections on police expansion in Toronto

I live in Toronto at the intersection of St. Clair and Vaughan. Around the corner from my apartment, a young Black man was forcibly restrained by a transit fare inspector officer a year ago. The officer claimed that the young man hadn’t paid his $2.10 fare. Cellphone footage shows the teen being pinned down and handcuffed as he yells, “I didn’t do anything! You’re hurting me!” No charges were laid.

Directly behind my building, where my neighbours park their cars and I store my bicycle, there is a laneway. This is the laneway where Toronto Police stopped me in 2015 because I “matched the description of a suspect.” Apparently, I was “doing things the hard way” when I refused to provide identification after being stopped. Three police cars surrounded me, flashers on, a police officer made a racist remark, and I was questioned for forty minutes. I was eventually released without charge and without providing my identification.

Roughly a fifteen-minute walk from my apartment, there is a quiet residential street named Lauder Avenue. My dear friend Ben, who now lives in Victoria, B.C., lived on Lauder back in 2009 with his sister. Ben and I used to play a lot of chess together. Just up the street from Ben’s old apartment is 192 Lauder Ave. Here, in 1988, Toronto police officer Const. David Deviney shot Lester Donaldson, a 44-year-old Black man living with schizophrenia, in the chest at pointblank range. The police alleged that they received a call stating that Donaldson was holding hostages. Donaldson was found alone. They also claimed that Donaldson lunged at them with a knife.

Though charged with manslaughter, Const. Deviney was ultimately acquitted. The decision spurred the creation of the Black Action Defense Committee (BADC), founded in 1988 by Black activists working to create a fair and just policing system in Ontario and Canada. BADC laid the foundation for much of the ongoing work in Toronto to increase police accountability and to redress anti-Black racism.

These are just a few examples of the countless places in Toronto marked by police harassment, assault, intimidation, and the loss of life. These geographies of trauma are rarely acknowledged; instead, they are erased by the logic of police expansion, swept up in the growing belief that police are a necessary part of our daily lives.

Last November, the Toronto District School Board (TDSB) voted to terminate its School Resource Officer (SRO) program. In a survey of 15,500 students, 1,055 students reported that an SRO had made them feel uncomfortable while attending school. An additional 2,000 reported that an SRO had made them feel watched or targeted at school. While the data generated by the survey provided the final justification for terminating the program, in reality, parents, youth, researchers, community organizers, and journalists had been fighting the program for nearly a decade. When the largest school board in the country, the TDSB,voted to end the program, it signalled a major win for radical organizers in the city, and a massive victory against the seemingly unending expansion of police surveillance and force in Toronto.

At the time of the decision, Trustee Alexandra Lulka, one of three trustees who voted against terminatingthe program, issued a statement about the removal of the program. In the statement, she wrote:

“Throughout this review, it has saddened me to see a deep distrust displayed towards members of the law enforcement community. They were not dealt with as a stakeholder throughout this process, but rather as an element to be managed. At no point were our officers invited to take part in this review, and to provide their own input on how to improve this program.”

“Instead of constructive criticism,” Lulka added, “I witnessed a fundamentally politicized process, with a rush to call for the program’s removal.” Lulka’s arguments typify those made by the program’s supporters and by the police-state itself: namely, that the harms caused by the program pale in comparison to its benefits, and that a few people — in this case, children — who “feel” intimidated does not justify termination.

In the lead-up to the program’s termination, community organizers, parents, and youth had to remind detractors and journalists repeatedly that one student harmed is one too many. We were not interested in discussing the merits of a program that threatened the physical, psychological, and spiritual wellbeing of some of the most marginalized youth in the city.

We encountered intense anti-Black racism in response. Personal attacks and threats filled the inboxes of our social media accounts. Callers to radio shows insinuated that the youth experiencing greater surveillance must have done something to deserve the added attention. In one instance on CBC radio, I listened to a caller speculate that “these kids must be dealing drugs or something.”

Like so many cities in the world, Toronto is addicted to policing. Policing consumes a whopping 10.5% of the city’s $10.97 billion tax-supported operating budget. In moments of perceived crisis, as in the case of the gun violence in Toronto earlier this summer, the police budget can be increased to put additional police on the streets and expand use of surveillance technologies. In addition to its vast economic resources, the Toronto Police Service enjoys the support of a largely uncritical media landscape, which takes for granted the role of police in daily life.

In September, the police announced that they would be expanding the Enhanced Neighbourhood Officer (ENO) program. ENOs, like SROs before them, are stationed in “high needs” neighbourhoods. “High needs” is a label affixed to communities with, among other things, high levels of unemployment and large racialized populations. Police officers are then placed in these neighbourhoods with the goal of improving community relations and preventing neighbourhood decline.

At a recent Toronto Police Services Board meeting, where board members reviewed a report on the ENO program, Deputy Chief Peter Yuen stated:

As a follow-up to this statement, school board member Ken Jeffers asked, “How does this reconcile with the recent discussions we’ve had around SROs and schools, and that sort of thing?”

Yuen responded, “That’s a different discussion. We are working right now with the TDSB on a different delivery model to our schools. Our young people are extremely important and the school is an extremely important partnership. Neighbourhood officers will obviously have schools — that will be part of their patrol, part of their community — but, at the same time, we’re working on a new protocol, a new mutual agreement for how to deliver services to schools.”

And that was how many community organizers found out that the police were working to undermine the last ten years of organizing around the SRO program, and more that thirty years of police accountability work. At police headquarters, on a Thursday afternoon, in front of some fifty people, the deputy chief of police announced almost flippantly that the police are working closely with the TDSB to reintroduce police into schools.

As I prepare for this battle, I see police in schools not in isolation but as a reflection of the anti-Black racism and state violence endemic to this city. Despite what Deputy Chief Yuen said, the issues of Enhanced Neighbourhood Officers and School Resource Officers are not “a different discussion.” Though I myself did not attend an elementary school or high school with police, I live in one of the thirty-three neighbourhoods with an ENO. I have been carded and harassed by the police and I have feared for my life as a result of an  encounter with police.

Appeals to rationality are destined to fail, simply because the very notion of rationality requires a self and an other. More often than not, the “other” is a person like me: a Black body and a racialized individual. With this “other” in mind, people feel justified putting police in schools, or increasing police stops, or expanding police brutality, or increasing the police budget ad infinitum.

Despite decades of data on racism and policing in Toronto, somehow there isn’t enough evidence to convince the population of the magnitude of police violence and the trauma it inflicts. There is always a push from people who view people of colour as lesser and disposable, a necessary cost of repairing a broken system rather than dismantling it. Whether the issue is police brutality or racial profiling or any other number of oppressive acts, time and time again our stories are dismissed as anecdotal.

In June 2017, I appeared on CBC Radio to speak to the harms the SRO program was inflicting upon youth, particularly racialized, low-income, and undocumented youth. I appeared opposite Mike McCormack, head of the Toronto Police Union and a man descended from several generations of policing in Toronto. There are few people more invested in the preservation and expansion of policing in Toronto than this man.

At one point in the debate, I noted that fear of policing does not stop at the threshold of the school entrance. The negative impacts of community policing must be factored into a student’s experiences of an SRO. The host of the program followed up by asking whether I trusted police ( a deflection), and so I shared my experience of being stopped in the laneway. I said that I did not and never would feel safe around police.

The host responded saying, “well, that’s really sad,” before claiming that, “for many people, the police are a sign of a civil society.”

I reflect upon the campaign to end policing in schools, and remember all of the people so deeply invested in dehumanizing Black people that their response to violence is not sympathy for the survivor but remorse for the police, its perpetrator. This is anti-Black racism. It is manifested in the calls for more evidence and consultations, while Mike McCormack tours the media circuit as an expert. It’s in Lulka’s claims that police were not treated as stakeholders. It’s in the rebranding and refinancing of programs such as the SRO program.

Anti-Blackness refuses to acknowledge the suffering mapped onto streetcar platforms, laneways, and quiet residential streets. It lives in the interventions of radio hosts who do not want listeners left with the taste of Black trauma in their mouths, but instead a gentle reminder that we need police.

Initially I considered titling this piece “if these streets could talk,” borrowing from a commonly used phrase about the secret lives of our streets. Yet, as I contemplated this title I realized that there was, embedded in this phrasing, the assumption that: 1) the streets haven’t spoken in the past; and 2) there are people listening to what the streets have to say.

This is failed logic. Whether through the blood rinsed down sidewalks and into our sewers, or through organized protest, the streets have spoken many times over. They have told us time and time again that Toronto, like so many other cities in this land we call Canada, is a place of grotesque violence, abuse, and shame. As I wait for the streetcar, I picture a young Black man, not yet grown into his adolescent body, being pinned down to the ground. The officers kneel on the boy’s spine as his lips and teeth gnash against the ground below. “I didn’t do anything!” he yells. “You’re hurting me!”

Phillip Dwight Morgan is a Toronto-based writer and activist. He is the inaugural rabble.ca Jack Layton Journalism Fellow. His essays, op-eds, and interviews have been featured on cbc.ca, macleans.ca, rabble.ca, and in Briarpatch and Spacing magazines.