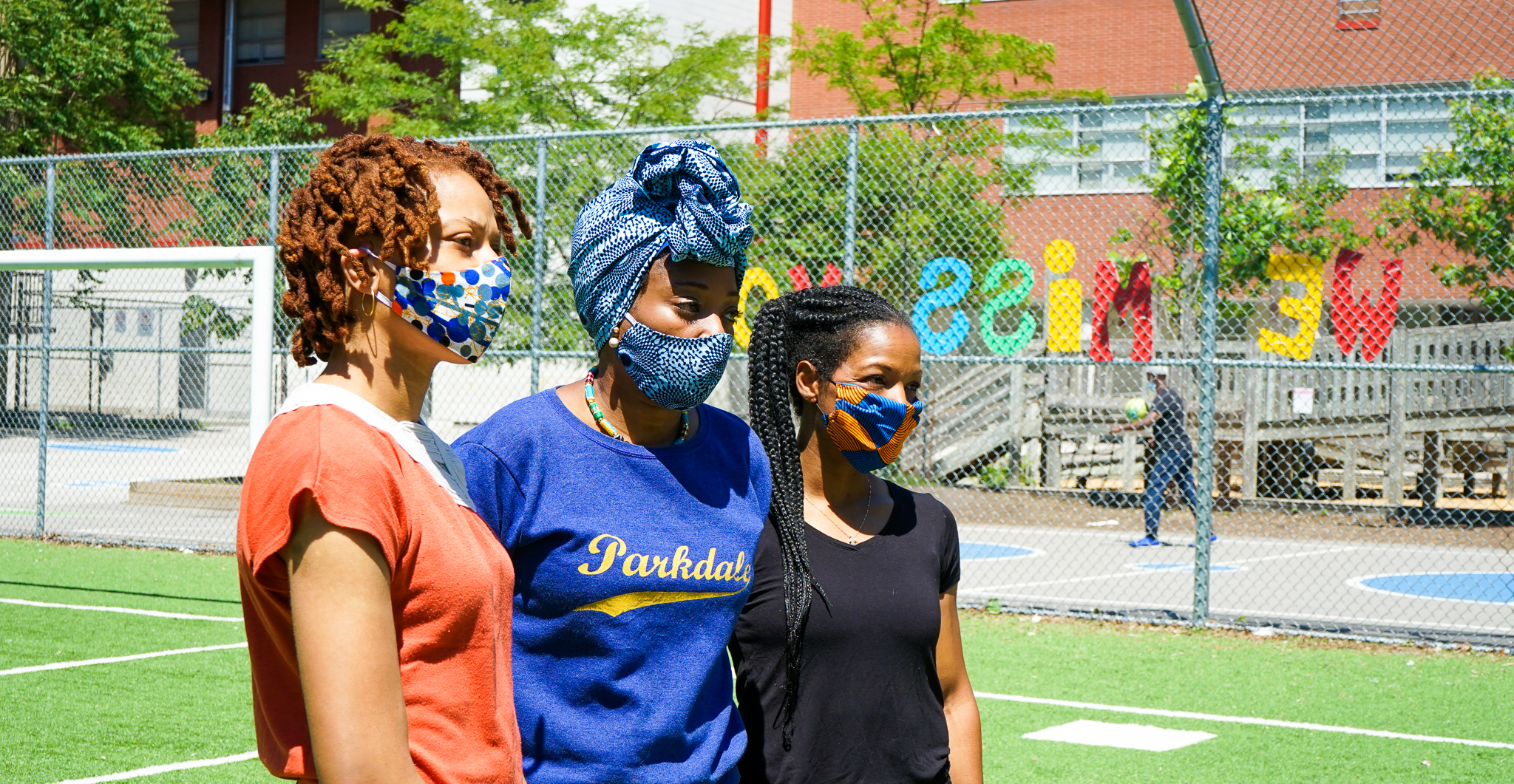 Parents, Debbie King, Tania Daley and Naomi Joseph say they have waited long enough. The three members of Queen Victoria Black Students Success Committee  (QVBSS) told assembled media outside the school yesterday that they had followed the TDSB human rights process in submitting a list of 18 alleged incidents of anti-Black racism against Principal Alana Hardy, who is currently on leave of absence. But they haven’t gone public with their complaints that allege racially motivated acts of harassment and bullying at the hands of the principal.

They submitted this list on March 11. Since then, they say their group has received no information or updates from the TDSB. So, they have decided to withdraw their formal complaint with the Board’s Human Rights Office and make their allegations public. They have also sent a letter to Education Minister Stephen Lecce asking him to “address the racist leadership in our ward and remove the racist teacher or staff members responsible for dispensing hate mail at Queen Victoria P.S.”

The story is closely tied to another that began back in January, when former Vice-Principal Jamea Zuberi received anti-Black hate mail:

Though the TDSB knew about incident soon after it happened, it didn’t mention it to anyone, particularly Black members in the community for whom there was a direct impact. The matter was turned over to police and is being investigated by the TDSB. There is more information about the whole story in Parkdale parents want answers about racist letter

Chair of QVBSS, Debbie King said that while parents have received letters of acknowledgement, and an apology for the way this incident has been mishandled in the 5 months since it surfaced, there hasn’t been any action to ensure that Black students and staff members will be safe when they return to school in September. She added that TDSB Director John Malloy said that there was no guarantee the letter writer would be found.

Turning to the allegations of anti-Black racism, Ms. King said that “the history and the pattern of racist behavior that we have seen from Principal Hardy brings into question the tone and culture of the work and learning environment that was set for the school.” Vice chair of QVBSS, Tania Daley added some details.

She alleged that Ms. Hardy put off the group’s request for data on how Black students were faring in the school, urging them to look at information about all groups. QVBSS wanted this information to support Black students’ schoolwork and eventually got it from another source in the TDSB.

Stemming from the letter described above, in January 5 Black teachers were put on leave without explanation to members of the school community. The QVBSS committee normally met in one of those teacher’s classrooms. According to Tania Daley, the group was told it would now have to get a permit if it wanted to meet. Their work in the school, she says was being disrupted at every level.

Ms. Daley said there was another incident in February when the group was trying to organize African Heritage Month activities and were allegedly told by Ms. Hardy that they couldn’t meet at the school because of the teacher job action that was currently underway, despite the fact that the mostly-white Parent Council could hold meetings. When the group tried to meet in the school lobby with Parent Council members after school one day, Tania Daley said that Ms. Hardy, who was off-site at the time, called the two vice-principals to instruct them to order them out of the lobby and followed up repeatedly to make sure that they were going.

Shortly after this incident, Ms. Daley claimed, Superintendent Sandra Tondat emailed group members to reprimand them for meeting when they had been instructed not to.

Tania Daley alleges Ms. Hardy said she could “turn a blind eye” to Lunar New Year decorations but issued a “hard ‘No’” to African Heritage activities.

Ms. Daley said that her group learned of one community member who allegedly approached Director Malloy and told him that, with Ms. Hardy on leave during investigation into incidents at the school, it would be a travesty and a small riot would occur if she was not returned as principal. This is the kind of threat she said, that Black children face routinely, “ …mental,  emotional, physical and spiritual violence every day.”

These parents have been through a lot. They related how they had been surveilled and followed by a car down the street after meeting with a reporter. They have been advised that the Crown Attorney says there is not enough evidence to bring a charge of hate crime against whoever wrote the letter, if he or she is ever caught. Criminal harassment is best they can hope for, despite the fact that the letter details “getting rid” of Black members of staff.

Contacted about the release of allegations against Principal Hardy, QVBSS, the TDSB responded:

“We respect that members of the school community want to bring their concerns to the broader public as they are understandably angry and outraged. We have acknowledged that what happened at the school should never have happened and that anti-Black racism has no place in our schools or anywhere else. We have also acknowledged that our initial response was lacking and should not only have been more comprehensive, but more compassionate to those impacted. Learning from our conversations with the school community and others, we have hired an external investigator to oversee the investigation into the initial anti-Black racist letter that was received by a staff member and other human rights complaints that have since been filed. The investigation will prioritize the letter and who is responsible and it is our plan that this portion of the investigation will be resolved by August 15.

We know that this process can be frustrating and is taking longer than anyone anticipated, but in the end, we want the truth to come out — whatever it may be — and need to give our external investigator the time she needs to investigate properly. To be clear, should the investigation determine that a TDSB staff member is responsible for the letter, their employment with the TDSB will be terminated.”

Debbie King, Tania Daley and Naomi Joseph see the story differently. As Tania Daley noted yesterday: “Segregation is alive and well, alive and well. This is the polite apartheid that Canada does not want to face.”