Bargaining beyond bread and butter: Teacher unions and the common good

A review of Teacher Unions and Social Justice  – Organizing for the Schools and Communities Our Students Deserve (Milwaukee WI, Rethinking Schools, 2021)

This quotation from historian, Howard Zinn rings through most of “Teacher Unions and Social Justice” recently updated from the 1999 edition. A lot has happened in education since then and this book from Rethinking Schools, comes at a time when parents, union activists and educators can look back over decades of resistance to the direction public education has moved in the U.S. as well as in Canada.

One of the most important ideas to take away from this anthology of articles is that educators must work tirelessly with unions and their communities if they want to maintain jobs worth going to. The pressure to cut costs and even profit from schools is just too great for there not to be a well-organized countervailing force. This is unionism that reaches beyond bread and butter issues like pay and benefits – though these are important – and embraces the requirement to improve conditions in the schools and neighbourhoods that surround them. Education workers, whatever they might feel about issues like class and professionalism, are kidding themselves if they think they are distinct from the families whose children go to their schools.

What’s best for the community?

The chapter, “Bargaining for the Common Good” by Saqib Bhatti and Marilyn Sneiderman illustrates this. Teachers with United Teachers of Los Angeles

(UTLA) had struggled for years to get the Los Angeles Unified School District (LAUSD) to improve at least some conditions for their schools and communities –basic things like reducing class sizes and adding green spaces to school/communities and, in a country where health care is beyond the reach of many, full-time nurses assigned to schools. UTLA and its partners developed a Bargaining for the Common Good Strategy that systematically involved parents, students and community members through meetings, one-on-one conversations and surveys to decide on the main issues about which they would bargain. They involved allies like Black Lives Matter to join them at the bargaining table.

In January 2019 – with community support- UTLA went out on strike to push for their  demands. They won increases in wages and benefits – but they were also able to squeeze out commitments from the LAUSD for more green spaces at school, more control over privately run Charter schools, support for immigrant families, more librarians, counsellors and nurses and less time spent, in a country obsessed with them, on standardized tests. There was $12 million promised to create community schools. Tellingly, UTLA was also able to extract a commitment from the board to reduce random searches in schools of students by principals and vice-principals looking for weapons. This  involved mostly non-white kids and has been a way of enforcing ethnic and racial division

UTLA also managed to get a commitment from the LAUSD to call on California governor Gavin Newsome to place a moratorium on Charter schools. Issues of Charter schools and privatization in general, are enormous in the U.S. Canadian educators see movement in the same direction, with Charters becoming more established in Alberta and the Ford government considering possibilities for profit within Ontario schools through online learning. In the U.S. billions of dollars have been siphoned from public education over the years to build up Charter schools and voucher systems.

Schools and their surrounding communities interact, for better or worse, depending on the willingness or ability of public officials to understand that relationship. So, it’s critical that collective bargaining and activism by educators embrace the concept of the community school. Kyle Serette, estimates in his article “Why Community Schools?” that the gap spent on extra-curricular activities between higher and lower wage earners is about $8 000 a year. Schools that interact well with their communities can mobilize students, school staff parents and other community members to bridge that and so many other equity canyons by focusing on the “Six Pillars of Community Schools:”

For any of this to happen, you must build social justice power through educator unions. This does not come without years of persuading and cajoling. It’s something we see here in Ontario, where teachers’ unions have been notoriously divided over the years by gender, religion and high school vs elementary staff. 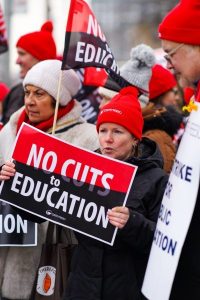 Even within unions and their locals there is a perennial tension between so-called bread and butter unionists whose main concerns centre on wages and benefits and others who want to push their union to fight as well, for improvements in schools and communities. This was clearly the case in the bitter election fight last summer between union activists and stay-the-course executives here in Toronto.

In “Social Justice Unionism Comes to Baltimore,” Rachel Cohen notes that activist caucuses have grown in teacher unions in cities like Philadelphia, Los Angeles, Seattle and St. Paul. In 2015, a group called Baltimore Movement of Rank and File Educators (BMORE) began to challenge its union local to become more than a good service union that did well by its members in salary and health benefits. BMORE wanted it to mobilize teachers to become a political force aimed at making improvements in local neighbourhoods. The push to elect more progressive union leaders became fractious as the longstanding leadership of the local contested the victory of the BMORE slate of candidates, though in the end this social justice caucus prevailed. This story certainly underscores the need to build alliances within union locals as well as communities.

There’s a lot at stake. Bob Peterson, the former head of the Milwaukee Teachers Education Association (MTEA) in “A Revitalized Teacher Union Movement,” explains the  2011 move by  Wisconsin Governor Scott Walker to limit the power of unions. He imposed a law known as Act 10 that stripped public sector unions- with the exception of the police and firefighter unions that endorsed him – of basic bargaining rights including the right to arbitration. Act 10 left them with the right to bargain wages up to the cost of living, while it took away essentials like automatic deduction of union dues and added rules to make recertification of a public sector union more difficult. These moves were accompanied by the largest cuts to education of any other state in the U.S. while increasing tax deductions and voucher payments for well-off people who could afford private schools. Similar moves across the country have sparked a resurgence in militant unionism in places like Chicago (2012) and West Virginia (2018). This has a purpose beyond challenging retrograde governments. As Mr. Peterson writes about social justice and unions:

“The growing militancy and push to transform the very nature of the teacher union movement may well be the most important force in our nation to defend and improve schools and, in so doing, defend and improve our communities and what’s left of our democratic institutions.”

To build a social justice union means making union leadership more democratic and participatory. Bob Peterson argues that unions need to be oriented towards building coalitions with other community groups who have issues beyond the school door, such as the “New Jim Crow” policing in Milwaukee that enables police to stop and frisk predominantly racialized people. They need to push for teachers to “reclaim” their profession and classrooms through peer assistance and evaluation programmes while taking the lead on curriculum issues like anti-racist education or improving assessment.

As Howard Zinn wrote, at the top of this review, social justice unions must support teachers to teach “unionism” – though it doesn’t stop with that. It also means challenging students to critically understand the world that surrounds them, drawing for example from his famous book,  “A People’s History of the United States” which provides insights into history unlikely to be found in typical school texts. A social justice curriculum pushes students to question accepted beliefs; it is anti-racist and multicultural; it is grounded in the lives of students, hopeful and rigorous. It also embraces activism as students help to organize against policies and standards of governments that actually hurt public education and the communities it should thrive in.

“Teachers Union and Social Justice” is a book that unions for the people who work in schools and their communities need to provide their members. It is full of history, tales of success and certainly, some major challenges – and we know there will be plenty more of them to come as governments team up with business to recreate a public education that suits their stunted view of learning. This book is a great source to help explain the forces all unions face and how to build alliances to resist them, while engaging educators, students and parents to build communities that suit the needs of the people who live and work in them. 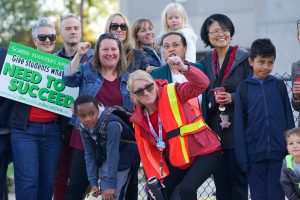