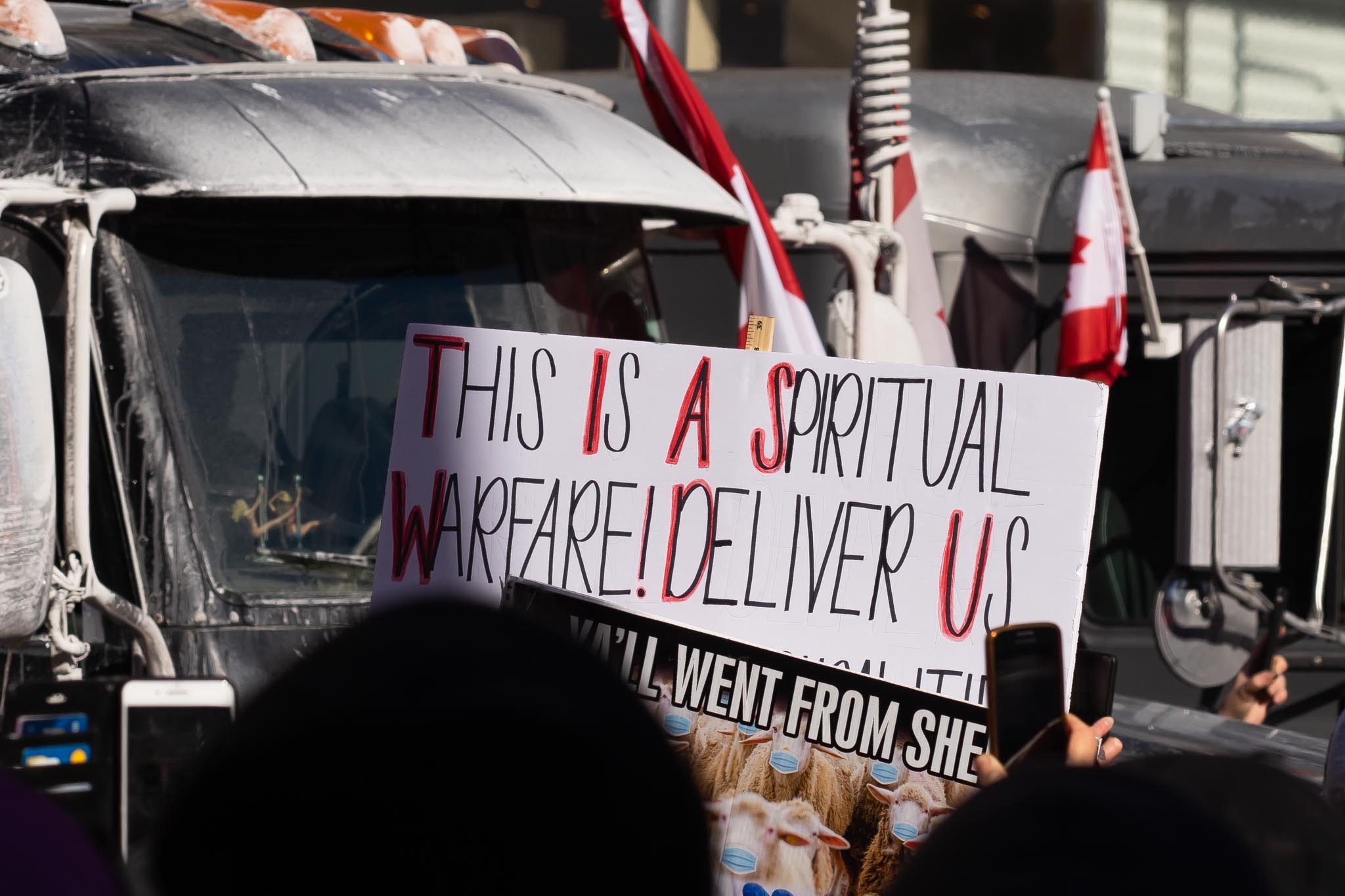 The freedom-flipped-on-its-head-convoy: readings for educators

Let’s understand one thing: the so-called “Freedom Convoy” is at best about what some people consider to be their “freedom” to put those around them at risk of infection without consequence or responsibility, concepts that fly in the face of the convoyers’ grotesque sense of entitlement. It is freedom perversely flipped on its head. The very idea of this convoy has, at its heart, a fundamental authoritarianism: dictating others’ rights at the whim of a minority of people too disconnected from society to help preserve its health – to just do the right thing. This convoy is not about solidarity; it’s not about collective rights. It is, as Ryan Kelpin says in a recent Canadian Dimension, about toxic individualism and it’s deeply troubling.

That’s at best. But what has become clear since the protests and occupations began back in January, is the powerful right-wing involvement in and support for the convoy. One of the organizers, Canada Unity, demands that the duly elected government resign if it doesn’t do what it says and drop all health mandates – it backs off, but you can see the ideology here. Supporters dismiss the swastikas, Confederate flags, desecration of symbols, threatening behaviour and complete disregard for residents who live near wherever the convoyers happen to be, claiming that it’s only extremists – every group has its extremists and it’s just the media trying to put the rest of them in a bad light – to take another shot at their freedoms. Organizer BJ Dichter scoffs at white supremacy: “Let’s assume there were people who do have a Confederate flag … I don’t care … I want to hear unacceptable opinions.” 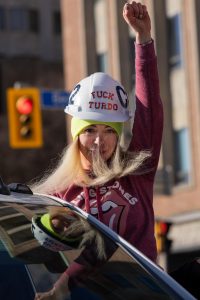 But they won’t be dismissed. Both federal and provincial Tories have danced back and forth with them, underwriting their bizarre calls for freedom in the midst of a global pandemic, while asking them to please go home. Not until the economy starts to be affected do they do a 180 and support some emergency measures – sort of. The right-wing People’s Party of Canada knows they can gain traction here. Conservatives like leadership candidate Pierre Poilievre stand on an overpass to welcome the convoy to Ottawa because he knows that they will help him pull the Tories even further to the right. Convoy organizers know they have gained traction no matter what happens.

There are important questions to answer. Why the kid gloves on convoyers plugging international bridges and laying siege to the capital city when police were quite comfortable kettling bystanders during the G20 summit in 2010, or moving on Wet’suwet’en hereditary chiefs’ supporters who opposed construction of a pipeline across Indigenous lands or carding people for walking while Black? Why did it take the Emergencies Act to get meaningful action?

What can educators do to help their students get some idea about this fearful history unfolding in front of them?

In the past, Toronto DSB Student Equity Program Javier Davila would prepare mailout lists for educators, with readings about current and often disturbing issues hitting the news – he did a great job on the January 6 2021 Capitol Riots.  They used them for background, updates on current events, to spark ideas for discussion in class and so on. In May 2021 when he shared resources about the latest Israeli attacks on Palestinians, the TDSB bowed to pressure from a few Israeli supporters and stopped the mailouts.

Current resources are critical for educators, so School Magazine is filling the gap left by Javier. Here is a list of articles and their links for readers who want to better understand the ominous events that have occurred over the past weeks and their implications.

General information about the convoy:

Did Kenney’s support for ‘Freedom Convoy 2022’ encourage copycat Coutts blockade he now condemns?  2022-01-31 Rabble– Alberta premier Jason Kenney supports the convoy, then changes his tune as he says the blockade at Coutts AB needs to stop. 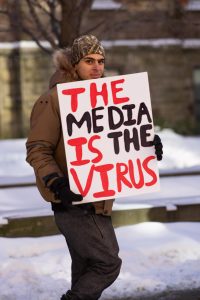 The federal government has invoked the Emergencies Act. Here’s what that means  2022-02-14 CBC News

Doug Ford has played right into the protesters’ hands 2022-02-14 “The pandemic is no time to panic in the face of unmasked protesters. Yet that is precisely what the premier has done by enabling and emboldening all those who stand against any and every restriction while the police stand by” Toronto Star

What it means for schools

Doug Ford is “bracing for impact.” What about everyone else? 2022-01-04 School Magazine – as recently as early January schools were closed with the latest COVID wave. Staff and parents worried about contact tracing, proper masking and vaccination availability.

Teachers, parents express concerns about Ontario’s return to school plan  2022-01-11 Toronto Star – Doug Ford had talked about a “tsunami” of COVID cases – parents not sure whether schools are safe enough to send their kids back

‘Unmask the children’: Anti-vaccine convoy rolls past Strathroy high school  2022-02-11 CBC News  – Convoy is meant to encourage governments to “unmask the children.” Some students came out in support.

GUNTER: Roll on, Freedom Convoy 2022-01-25 Toronto Sun Article attributes cause of the protests to Ottawa’s insistence that truckers be fully vaccinated to enter the U.S. It doesn’t mention that this is also a U.S. rule

What the truckers want 2022-02-10 Common Sense   – Gives a pretty good idea about the thinking that choice needn’t bear consequences. 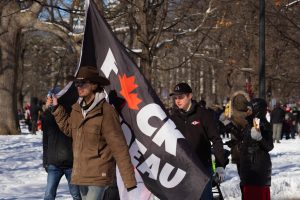 symbols have prompted profound shock and outrage across the country, as well as caused great hurt to our Indigenous brothers and sisters and members of other communities.”

The so-called Freedom Convoy was never about truckers, or border mandates 2022-01-30 Trucknews.com

Ottawa truckers’ convoy galvanizes far-right worldwide 2022-02-06 Politico – Rightwingers from The U.S. in particular are eager to ride on the “Freedom Convoy”

Canadians Aren’t Actually on the Brink of Civil War Interview with Stephen Marche Author of “The Next Civil War: Dispatches from the American Future” 2022-02-07 Slate

What the ‘freedom convoy’ reveals about the ties among politics, police and the law  2-22-02-08 The Conversation

Mexico went all in on ivermectin — a disproven COVID cure. Now there’s a fight over ‘false and misleading science’ and claims of ‘colonialist’ politics – 2022-02-12 Toronto Star. – re: claims that Ivermectin provides a reason to avoid masking or vaxxing.

What the Ambassador Bridge and other ‘freedom convoy’ blockades mean for Canada-U.S. trade 2022-02-13 The Conversation

Here’s how the so-called Freedom Convoy is still raising ‘thousands of dollars’ per minute even without GoFundMe 2022-02-05. Toronto Star

Canada Must Investigate the Convoy Money 2022-02-08 The Tyee

Convoy protest received hundreds of donations that appeared to be from abroad. 2022-02-10 CBC News

BJ Dichter gives speech to People’s Party Canada convention in Quebec 2019-08-19 YouTube – describes report on the ‘interweb’ claiming Conservative Party candidates have “alleged ties to Islamist extremism…why do they have such garbage in their party.” He goes on to explain how moderate Muslims want to “leave the garbage of their birth country behind them.” 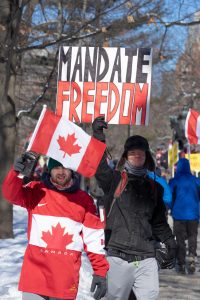 The Left Is in Grave Danger 2022-02-02 Alternatives International – article by Sid Ryan describes racist antisemitic components of this right-wing protest.

Meet the Extremists and Social Media Influencers at the Centre of the Far-Right Siege of Ottawa – 2022-02-08 Press Progress – Includes James Bauder- linked to Yellow Vest movement.

Who is who? A guide to the major players in the trucker convoy protest  2022-02-10 CTV News – includes James Bauder, Tamara Lich, BJ Dichter, Randy Hillier and Brian Peckford

Canada Unity – 2022-02-08 Convoy organizers led by James Bauder who produced and then withdrew the Memorandum of Understanding that called for the Senate and Governor -General to “desist all unconstitutional, discriminatory and segregating actions and human rights violations” and for the government to resign if they don’t

Vaccine-mandate protesters are headed to Ontario legislature. What that means for premier Doug Ford 2022/02/04 CBC News– Ford says: “If people want to come down and protest, God bless ’em. I understand their frustration. I really do.”

Bergen pushed O’Toole to back convoy saying there are ‘good people on both sides’: sources 2022-02-04 CTV News – Interim leader Candice Bergen continues to support the convoy

Candice Bergen’s nod to Trump is a sign of Canada’s descent, but the Charter may save us  2022-02-09 The Conversation – Bergen pushed O’Toole to embrace the convoy following Donald Trump’s support for Unite the Right rallies in Charlottesville, 2017

From other parts of the world

There is plenty more information out there. If you have some you think we need to see please email us at eatomag.18@gmail.com